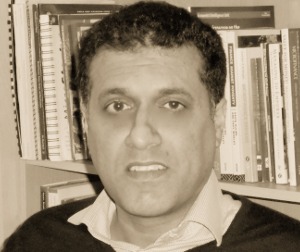 From Ecuador to Pakistan, from Sudan to Bosnia and Herzegovina, Ajaz Khan has been engaged in different forms of development work and microfinance. After years of being the senior policy advisor of Islamic Relief he now works as the microfinance adviser for Care International. One of his current projects is the very successful lendwithcare.org, a website that allows individuals to invest microloans in businesses of poor farmers and entrepreneurs worldwide. The perfect person to ask some questions on Islamic finance, I thought, so I went to London to meet him. A small nuance was immediately needed however.  “Technically speaking,” this very gentle man told me, “we shouldn’t call it ‘Islamic’ finance but ‘sharia-compliant’ finance because it’s finance which is in accordance with the sharia principles, whether it comes from an Islamic source or not.”

So non-Islamic institutions might very well be sharia-compliant without knowing it?

You know, finance and commerce are generally very important to Muslims. The longest verse in the Qur’an is actually about business and trade (Q. 2:282). A lot of hadith as well deal with commerce. So there is a lot of practical advice about commerce and perhaps a lot of that had to do with the fact that Mecca was a trading center and the fact that the prophet himself was a merchant. Yet at the time of the prophet there were a lot of financial practices that were exploitative. For example, when somebody took a loan off someone and he couldn’t repay it on time, his debt was automatically doubled. So in the new Muslim community rules were implemented to create a more level playing field and to stop the exploitation of the stronger versus the weaker. At its core therefore, sharia compliant finance is simply ‘dealing fairly between parties’ and ‘removing the possibility that the stronger one might financially abuse the weaker’. That’s all it is.

But I guess that many people in Muslim countries don’t just want ‘ethical’ finance and really want sharia compliant (micro)finance that adheres to all the specific rules and regulations.

It varies. Studies showed that there is a huge discrepancy both within and between countries. What people take for granted as a practice in Morocco is different than in Egypt for example. Nonetheless, there is always a significant section of the population that wants to follow their religious principles, even when dealing with finance. In some countries it might be twenty percent of the population that says it’s interested in having access to Islamic financial services. In other countries the proportion is up to sixty percent.

So it’s certainly not something every Muslim asks for, but there is indeed a significant amount of people that are truly interested in sharia compliant services – not just in Muslim countries but even in Western countries like the UK with significant Muslim populations. In Britain we have, for example, the only standalone sharia compliant bank, the Islamic Bank of Britain and all the main banks like HSBC or Lloyd have ‘Islamic windows’ which are sharia compliant accounts and services.

Are the financial products offered in Islamic banks or Islamic windows of the big banks truly different? We hear a lot about the fact that an Islamic bank shouldn’t take any interest yet, when you look at the eventual products they sometimes offer, you could put some question marks behind them. I’ve heard of banks, for example, who don’t offer a loan with interest when you want to buy a house, but they’ll buy the house themselves and then sell it to their client with a profit.

You’re right in being a bit sceptical. Islamic finance is, generally speaking, approaching a crossroads and we have to ask ourselves which direction we will now take. It has been developed for a number of years now and it has become more and more widespread but a lot of the institutions that have adopted Islamic finance are now essentially doing an exercise in financial engineering. They look at which exact religious rules they have to obey and think that, within these rules, they can come up with anything. So they’re not really changing their philosophy and way of doing business, they’re just changing the instruments.

Recently I was in Indonesia, for example, where I visited some small Islamic finance co-operatives. When I got to the bottom of the way they operate, it turned out that, if you take away all the levels, they were basically charging a flat rate of interest and then calling it ‘sharia-compliant’. They felt it was sharia-compliant because the interests didn’t increase and because they didn’t charge a penalty when somebody was a bit late with repaying his loan. They argued that it was ‘sharia-compliant’ because a scholar had said so. But no matter what a scholar said, if it looks like interest and it smells like interest, then it probably is interest.

It’s of course very difficult to change the way of thinking in all sorts of communities all over the world when people have five hundred years of doing business experience engrained in them. But there are also a lot of people involved in the Islamic finance that really want to stop for a second and reflect, to make sure that the same exploitative methods aren’t just dressed up as something else. So there are quite a few good organizations out there and they need a lot of support. One of those is the Farz Foundation of Farhat Abbas Shah. It’s quite an innovative microfinance organization. They give loans on partnership basis. They’ll give a loan and share the profits if there are profits – but also share in the loss if there’s a loss.

I would guess that we can find more innovators in the microfinance sector, since they are at the same time also involved with development work. They’re probably more careful about what they do.

Most of them give loans to the microfinance initiatives (MFI’s) at a yearly 5 or 10 percent interest rate. On top of it the inflation rate in microfinance countries is again between 5 and 10 percent. So we have a situation where some MFIs have to charge at least 20% without even factoring in their operational costs. Certain MFI’s in the field even started to routinely charge 60, 80 or even a 120 percent a year to the poor people – this cannot be right.

Is your own Lend With Care project meant as a tool to counter this problem?

Yes. The idea behind Lend With Care is to find other people that could give money to the MFI’s without the big funds and investors having to interfere. On lendwithcare.org individuals just bring in a bit of money and then we make it available to the MFI’s and charge them zero percent. We can do that because we don’t give any interest to the individuals who give the loans. The thing is of course that those who go online and give a loan don’t do it for the interest, they’re just happy to help people. But what is so good about it is that the loans are still loans. So they’re paid back gradually over a few months which allows the lender to loan the same amount to someone else. Many people see it as a new form of charity. It’s charity but it isn’t. It’s charity but it’s also business.

And who finances the whole organization behind lendwithcare.org? You probably need an elaborate structure to make sure that all the transactions are properly monitored.

We are financed by Care International, which works on the basis of donations and gifts. We also get sponsorship from The Co-Operative Group, the largest consumer cooperative in the UK. So we don’t charge the lender, nor the MFI’s on the ground. And we will keep it that way.

I suppose that the poor entrepreneurs welcome such projects with open arms. Do you place any restrictions on the MFI’s you partner with?

We select microfinance institutions with a strong focus on social-development and co-operatives that  are owned by their members – so any profit the co-operative makes goes back to the members. And of course we also have an explicit ethical policy at Lend With Care. We won’t finance any business that involves cruelty to animals, that damages the environment, that sells alcohol, and so on.

Does Care International have any Islamic background?

No, not at all. In fact it’s one of the largest secular NGO’s in the world – it works with people of all faiths and none.

So where does the choice come from not to support businesses that deal in alcohol?
That’s simply because we are convinced that the promotion of alcohol in rural areas often has a detrimental effect on the communities. Many of the values that are part of Islamic development work are also shared by others. So sharia compliant microfinance could often simply be called ‘ethical’ microfinance as well and I think we could probably gain more support if we did that.

Should I conclude then, that, when all is said and done, Islamic (micro)finance is really not much different from other (micro)finance?

When it comes to the ethical boundaries of what not to invest in, like weapons or alcohol, that’s the same for a lot of other ethical financial products. I guess the only thing that might be specific to Islamic finance is not to invest in pork. But that’s a minor detail.

Even when we look at it from the purely technical side, there is nothing really unique. You can talk a long time about all the specific aspects but for each one you can eventually find comparisons in conventional finance. That’s even the case with the idea of asking no interest. Go back five hundred years in Europe and you’ll see that people looked very badly on charging interest. So that never was something uniquely Islamic. A lot of Christian scholars also looked unkindly on interest. Even the Greek philosophers said it wasn’t a fair mechanism to do business.

Holding a PhD in Development economics with focus on Microfinance, Ajaz Ahmed Khan has been working for many years in several development organisations and microfinance institutions around the world. He has for example been the Director of ‘First Islamic’ in Bosnia, the Director of ‘START’ Kosovo and a Senior Policy Advisor of Islamic Relief. He currently works as the Microfinance Advisor of CARE International. Works Throughout his career Ajaz Khan has been involved in many development projects. One of his last is Lend with Care an award winning webproject that allows individuals to fund and support small entrepreneurs in developing countries.