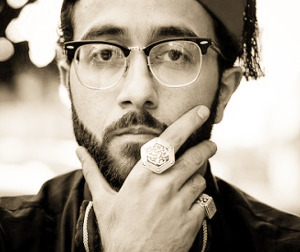 Yassin’s parents are originally from Iraq but emigrated to the United Arab Emirates when he was still very young and eventually took him to Canada. A graduate in Political science and Communication Studies, he went on to get a Masters degree in Media Studies with a focus on the identity politics in Hip-Hop poetics and the Arab-American experience. It should be no surprise then that his own music often questions the situation of Arab and Muslim migrants and the stereotypes they encounter.

I met Yassin in a slam class on music, poetry and art. It seemed the perfect opportunity to discuss the relation between activism, art and self-expression – all aspects of Yassin’s own identity as well as important topics among the migrant youth of my own country .

The last decade we’ve seen a lot of debates on culture and identity in the Western world. I guess you were caught in those debates simply because you were a migrant, just like many young Muslims in my own country whose parents or grandparents were migrants sometimes find themselves in the crossfire of those debates, whether they want it or not.

We moved to Canada during the eighties and in the nineties you had the first Gulf War. So there was a lot of racism then that was getting worse and worse. It started with Hollywood movies like Indiana Jones. But we didn’t think about it until it happened in real life and people started treating us in a certain way. So when I was young, there always was a sort of hurdle to being heard and I think I’m so loud now because I couldn’t speak then. I directly feel that was the reason I became a vocal performer because when I was trying to express myself as a kid, I was constantly confronted by the language barriers, the social barriers and the cultural barriers.

Considering the rising racism and Islamophobia many Muslims migrant communities experience all over the world, it indeed seems only logical that the activists and artists would become, like you did, a bit ‘loud’ . But I sometimes wonder whether that ‘loudness’ sometimes lacks a bit of introversion. Isn’t there too much focus on ‘expression’ so that it becomes a bit aggressive sounding?

I don’t think that’s specific for the Muslim community activists. If we look at the broader society and observe things like Facebook, Twitter, Instagram, and so on, we can see that it’s almost as if we have created our own importance. So I think it’s a sign of the times: everybody wants to be heard. Even when people are just talking to themselves, they want to hear themselves.

It’s both a gift and a curse. There are a lot of possibilities to independently create your own expressions these days but at the same time I also see a lack of thinking in the process because everything is so accessible. So we have to wonder: where do we draw our line?

Indeed, but I was also questioning the way people express themselves because I’m afraid that if the message or the package of that message comes across as aggressive to people, it becomes very difficult to win them over. So sometimes I have the feeling that the activists don’t tap enough into the well of introspection and spirituality that the tradition of Islam offers.

I understand what you’re saying, yet my personal conflict is not so much on that level. I have more of an inner clash at the university between teaching things and being a free thinker. The university is very much an institution and sometimes it feels like a corporation. When you walk in the hallways of the buildings you see Pepsi machines everywhere. And then you see advertisements of the university where you teach it says: “taking you to the real world” but we’re sitting in a class room.

Those were already things I thought about when I was a student myself. My ideas didn’t change, now I’m just on the other side of the spectrum. But certain teachers I had, got fired when they told us: “Forget about the box. Think whatever you want to think and do whatever you want to do because, in here, we simply work in an institution.” So I started wondering how I could say it to my students without saying it.

Of course I deal with eighteen year olds that just got out of college. A bunch of them are weed-smokers and partiers that often don’t give a shit. They just want to get their grades and bounce. So my question isn’t so much ‘how do we express ourselves’ but more ‘how do we make young people care’? Especially this generation: most of them are on Facebook during classes.

The problem with the political, activist and educational platforms is therefore that we tend to skip the generational aspect of change. Nowadays when you ask kids: “would you like to buy a CD.” They’ll reply: “Hell, no.” When you ask: “wouldn’t you read a newspaper.” They say: “Why? We have an iPad. I’ll just download the app or  I’ll just google that shit, and I’ll know.” That changes the relationship. It changes that aspect of introversion, because it makes you a ‘genius’.

It changes the relationship for artists like me as well. The experience of art seems less permanent than it used to be. When I was young, musicians that would release something, made it into an experience. You knew when it would come out, you’d go to the store to buy it and run home, pop the artwork out and listen to it on your stereo. But now you can download an album in literally ten seconds and then it’s on your phone. It becomes more digestible.

The fact that art and information become more easily digestible can go both ways of course. It can give people a broader view on more aspects of the world or it might make them more superficial. I see this as one of the underlying problems in a certain disconnect between intellectuals and activists in migrant Muslim communities. On the one hand you have a few academics that write in depth articles and on the other hand you have grass root movements that come on strong from the side of art or personal expression, but I have the feeling that they often don’t interact enough. You are an exception. You’re an artist that was offered a position to teach at a university. How do you think we can break that divide between the two?

I don’t think the divide has to be ‘broken’. I think it’s more about finding the right door to open it. It’s about figuring out the code. I was a guy who didn’t have a PhD and I was rapping for years and making much noise in the multicultural city of Montreal where rap is being viewed as a negative expression of angst, but I eventually still got asked to give a class at the university. That does in a way challenge the status quo. So art is probably the best way of figuring out the code. As they say: the poet can be together with the king and the pauper. He can be in the street talking to a beggar and at the same time be such a good poet that the king wants to invite him to listen to him. It’s all about finding that right poem and talking to both layers of society.

What about your ‘poem’, that’s to say, your music and your lyrics. Do you feel they keep speaking to both layers?

I think that’s the hardest part of being a communicator: to keep it fresh. I started with Hip Hop and I still make music and write verses but I’m trying to breach out. My main medium is music, but if I’m anything, I’d like to say I’m multimedia because I want to expand my modes of expression.

The thing is that we have to keep questioning our own decisions and expressions. So something I love to do is to reflect on all the experiences that brought me to where I am as an artist. It’s like an onion. You keep on peeling the layers. It might make you cry sometimes but when you get to the core of what you do as an artist, a writer or a creator, it kind of makes it pure again. It often gets lost in a technique. Things sometimes become like clockwork and you know what you’re doing but you’re not there anymore and you’re only doing the surface of it.

If you ask me, this brings us back to what I called the lack of introspection. For I often think that activists become so focused on doing things and expressing themselves that they sometimes forget why they’re doing those things.

True. As long as I was hanging out with activists I always had the feeling that as much as they were a part of the solution, they’re also part of the problem because it becomes a nested environment. It has its internal politics and people have their own individual missions – and some of them even became politicians so they became who they were talking against.

The same is true for musicians. Although Hip Hop used to contain quite some criticism on society, nowadays a lot of the stars have become narcissistic. That’s partly why I call myself the Narcycist. It’s an anti-statement to what Hip Hop became like. But it’s also to remind myself that there’s a narcissist hidden in every rapper. It’s to remember that I shouldn’t become like that and that I should try to keep myself humble… So I failed miserably. (laughs)

As the Narcicyst, Yassin Alsalman, has shared the stage with some of hip-hop’s elite like Kanye West and Mos Def. His company, The Medium, is a multimedia arts and music label and culture brand. He uses it to provide a platform for the production and dissemination of independent artistic endeavors and multi-media productions: www.wearethemedium.com

Yassin has penned a series of op-edss for CNN and the Huffington Post, and is the author of “The Diatribes of a Dying Tribe”, about the beginnings of the Arab Hip-Hop movement in America. His teaching career began at Concordia University where he helped develop a course on the history and cultural impact of Hip Hop culture.