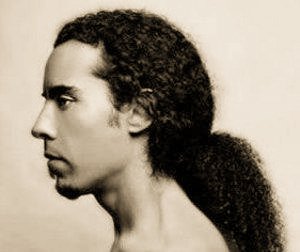 U-Cef is certainly no newcomer to the world music scene. He’s been fusing Moroccan music and digitalising Gnawa for more than a decade, fluently mixing Drum ‘n Bass, Dub and Hip-hop with sintirs and darbukas.

Born in Rabat, he eventually moved to New York, where he was the percussionist and drummer in various set-ups. However, for more than fifteen years now, he’s been living in London. A good place to get the maximum out of his creative blend, so it seems. After his ground breaking debut “Halalium” followed another CD called “Halalwood” which contains all sorts of collaborations with stars like Natacha Atlas, Amina Annabi and Rachid Taha.

You created quite some inovative music so far but the world music scene is of course not something with a very wide audience. Does it become a bit easier for you now, or is it still dificult to get your music out?

It’s still quite difficult. The world music scene in the end is a small club. It used to be run by people that wanted to get out of all the obvious standards and predetermined formats, but they became big as well, and eventually they formed their own ‘gang’ of people. It stopped being about their passion for the music and became more of a money-matter for them as well. I have a DJ act, together with visuals and a belly dancer, but then they wanted me to set up a 6 piece band. So I did that – it’s  called U-Cef & The Arab League – but for some reason that still doesn’t seem enough.

Of course,  I’m also one of the many. And smaller names get promoted less. My record label – the Belgian Crammed Records – does what it can, but it’s not easy for anybody. It seems difficult to promote artists that fall out of the general norms.

So you eventually wind up doing whatever you can to hang on. Any job you can find, be it sound engineering or anything else, you have to take it. I networked, I asked around, I connected to people and I did a lot of effort. You really can’t blame me for not trying. But it doesn’t necessarily get you very far.

How does that work with the bigger names in the scene? I heard certain people say, for example, that Natasha Atlas had indeed been heavily promoted by a certain group of ‘insiders’. In the same sentence they mostly also criticize her for not being ‘Arabic’ enough because she’s partly Belgian, partly Jewish and only partly Arab.

What should all of that matter? We should get beyond the criticism and just see the value of the music. Natacha Atlas did more for Arabic music than any other Arab star. When Arab stars come to London, more often than not they play in the Royal Albert Hall, which sells expensive tickets for an exclusive concert that only the very rich Arabs can attend. The press doesn’t give much attention to such concerts, and neither do the rest of the people.

But do people recognize that? Do they see what kind of bridge you build with your music?

To be honest, after 9/11, I hoped that some more people would have picked up on artists like me and would have wanted to present us as an example of what our culture in fact is all about and how well integrated it can be in the west. But none of it. Nobody comes to us.

And it’s not just about me or the small scene of Arabic music and Moroccon fusion. Beyonce,  JZ, 50 Cent and others stars, for example, have all used Arabic samples in some of their songs, but nobody asked them why they did that. None of the critics referred to it and no journalist asked them what attracted them in that music – not even a world music journalist!

I certainly can’t deny that the West has a bit of a cultural blind spot about these things, but how well received is your type of music in a country like Morocco?

In Morocco they actually put a lot of emphasis on western music as well. On top of it they only want the big names. Santana and Elton John come to Morocco, but nobody organises small gigs, nobody sets up small venues where new groups are given a chance to grow. They have this idea in Morocco that it has to be big to be cool. But that’s not cool, that’s just expensive.

Of course some new Moroccan acts like H Kayen, Hoba Hoba Spirit, Fnaïre and Bigg have appeared in the last 10 years, but they also quickly blew up to stardom, and then stopped playing in the smaller venues.

There’s just a lack of middle level in Morocco. Entertainment is either fancy and Sultan-like and western, or it’s about old and crampy tea houses.

Still, my first CD ‘Halalium’ really seemed to have inspired some people, not only in the west but also in Morocco, and it made them start their own bands and set-ups, but most of the time they perceive it as a bit too ‘futuristic’. They can’t really relate to it yet.

Your music does indeed sometimes seem music of the future, a future where fusion will be more accepted. But fusion and future often have a tense relationship with old traditions. How do the more ‘traditional’ Moroccans look at (Arabic) music these days.

In some people’s minds it still seems to be connected to some decadent cabaret clubs.” He replied. “Some people did tell me my music was haram for example. But that’s just stupid. Music isn’t haram at all. It’s not going to make you sinful or something like that. You can’t ban everything that puts a bit of pressure on your nervous system. According to Islam you should actually learn to cope with your nervous system and learn to control your urges. If you ask me, that’s one thing Ramadan’s about for example. So you can’t categorically deny every bit of artistic expression because you somehow relate it to some sort of decadent life-style.

If music would tell people that it’s ok to sin or to do crimes, that would indeed be haram. But my music doesn’t do that. It’s all about peace, cultural fusion and integrity. In a sense the texts and the messages are even educational. How can God be against that?

U-Cef is a Moroccan musician based in London. He fuses traditional gnawa with modern beats and basses. His two albums are ‘Halalium’ and ‘Halalwood’

U-Cef’s DJ Set and U-Cef and the Arab League can always be booked at halaljoint@yahoo.com