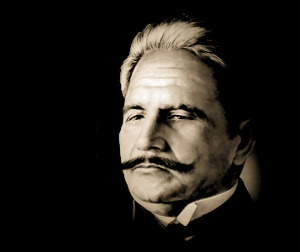 Sir Muhammad Iqbal is little known in the West but he is of enormous importance to many Muslims. Allama Iqbal – as he is reverently called – was a man of many facets. He was a poet, a philosopher, a scholar of Islamic civilization, a reformer as well as a statesman. So although he’s the driving ideological forces behind the Pakistani independence movement, he also became regarded as the Shair-e-Mashriq (“Poet of the East”) in the Urdu speaking world.

Iqbal had an enormous influence in the Islamic thinking of this region and his ideas ultimately led to the creation of the country named Pakistan. His intellectual legacy therefore continues even today in the many domains he wrote about. It should not wonder then that many scholars and academics continue to do extensive research on his elaborate writings and thoughts.

To learn more about Iqbal myself, I spoke with Tahir Hameed Hanoli, the assistant director of the Iqbal Academy in Lahore.

I only had to read a little bit about Pakistan’s history to realize that Iqbal’s influence in Pakistan was and is enormous. How come then that we don’t know much about him in the West? Those with a bit of interest in the Asian subcontinent do know about Jinnah, who was the first president of Pakistan, but seldom do we hear anything about Iqbal.

Jinnah has a specific character of course. He’s the political leader and the founding father of the country. It’s only normal that the founding father of a country becomes discussed much more than others. Iqbal, however, died before Pakistan came about. On top of it, Iqbal’s dominant part of his personality wasn’t as a political figure. He was a thinker and an inspirer. So if Iqbal was translated, it often was in the local languages, or the main languages of the Muslim world, but not so much in English or French.

How deep does his influence in Pakistani society reach? Is it a bit like Rumi, whose poems you can find hanging on the walls of many Turkish living rooms or whose sayings have sometimes become idioms in Turkic and Persian languages?

It’s the same indeed. His words will be on the tip of the tongue of the common man in Pakistan. That’s probably because he always was a poet as well. So, although he is the topic of many academic debates and although it’s not easy to do a full study of Iqbal’s thought, he could reach the heart of the educated elite as well as the uneducated masses.

He was also a thorough political thinker however. Do you think the Pakistan of today resembles the Pakistan Iqbal would have wanted?

Of course his vision of Pakistan was an ideal. And you know very well that an ideal is always within reach though at the same time never within reach. The foundations are certainly totally based on the thoughts of Iqbal. For example, Pakistan was created as a continuation of the Muslim civilization, but, when the country was founded, they also adopted a modern parliamentary state system. That goes back to Iqbal’s political vision. The same happened with his interpretations of sharia and fiqh. Iqbal often used the term ‘ijtihad’ and as such ijtihad has been adopted as a way of dealing with the classical concepts of Islam within the state.

Obviously there are many things that have yet to be done. Yet just like Iqbal is optimistic, we should be optimistic that there will be a time when it will be almost fully realizable. Though, in a way, it’s also a never ending process. One of the major things that Iqbal stresses is innovation and creativity because he always said that Islam and the Qur’an give us the instruction to explore the world, to innovate and to update. This principle applies to every domain of life and we have to do it constantly.

Is there some verse of Iqbal’s poetry that is, personally speaking, very close to your heart?

But I’ll give you one particular sentence that you might find beautiful: “You must live your life in such a way that when the almighty Allah decides your time to die has come, He will repent once you died, because you were in fact a man that didn’t deserved to die.”

There is a very deep spiritual and intellectual connection between Iqbal and Rumi. Iqbal himself claims that he was the continuation of Rumi’s work. He saw Rumi as someone that thought the people that the human being is not limited to what we see but has a spiritual foundation that goes far beyond our sight. He saw it as his role to teach this to people and to help them realize that there are different realties which we cannot experience with the five senses.

Nonetheless I’ve heard that Iqbal could also be very critical about Sufism.

For Iqbal there was absolutely no discrepancy between Islam and classical tasawuf. Quite the contrary. But he did attack the type of Sufism that makes you ‘actionless’. He is very critical of those philosophies that say that everything around us is an illusion, that life is but a dream, that our deeds don’t matter and that we can go about just floating around in some mystical experiences. In his eyes, Sufism makes you a man of action because it gives you a target and a destination. And that destination is balance. Balance within yourself and society. And you can’t achieve that balance without action.

Sir Muhammad Iqbal (November 9, 1877 – April 21, 1938), also known as Allama Iqbal, was a philosopher, poet and politician in British India who has greatly inspired and influenced the Pakistan Movement and consequently the ideology of the Pakistani state. He is considered one of the most important figures in Urdu literature. His most know English book is The reconstruction of religious thought in Islam.