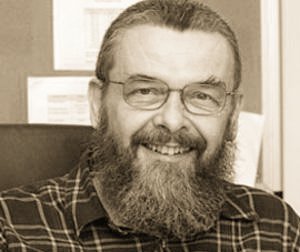 Prof. Dr. Steffen Stelzer is the Chair of the Department of Philosophy at the American University in Cairo, teaching a broad range of different philosophical subjects. Originally German, he moved to Cairo in 1978 and lived there ever since. In Cairo he came into contact with a Sufi tariqa and became a member. I met him in 2007, on an International Symposium on Mevlana Celaleddin Rumi in Istanbul and took it as an opportunity to discuss different aspects of contemporary Sufism.

How ‘alive’ are Sufi orders today? Are they not a thing of the past?

In Turkey, as well as in many other countries of the middle east, there certainly are Sufi groups or tariqas that are quite alive but often they’re not very public or ‘official’. The Mevlevi order however, which most people know as the tariqa of Mevlana Rumi, has become a matter for tourism. It’s not a live spiritual tradition anymore, though other tariqats use some of the methods of the Mevlevi in their spiritual education.

Whether a Sufi tradition is truly ‘alive’ actually depends on the fact whether the present Sheik is an inheritor of the tradition in an uninterrupted chain. So the important thing is whether the spiritual knowledge of has been transmitted through an uninterrupted series of teachers. Today in many of those groups that chain has been cut. And then what we’re left with is simply what we call in Arabic a ‘barakah’, a sort of ‘blessing’. Or worse even, sometimes it’s just a show. As such, you always have to look for a Sufi order where that chain of transmission was uninterrupted, where the present Sheik is an inheritor of a vivid tradition. Because that means he can guide people. It’s very rare these days, but it still exists.

Is it impossible then, that a new ‘sufi tradition’ would arise?

I would say so. The number of Sufi orders has been set a long time ago. There are also sayings of the prophet about how many groups Islam will divide in and supposedly only one of those groups will be the true embodiment of his message. But of course he doesn’t say which group that will be – so people have a lot to fight about. (Dr. Stelzer laughs)

That being so, would you say that you need to be a Sufi to really understand Rumi?

I would say yes. To understand Rumi truly, you have to be a Sufi, or you have to be a disciple of a true contemporary Sheik. If you’re not, then you’re missing at least one dimension. Perhaps you’re even missing the main dimension.

Rumi is not a matter of scholars. He didn’t like scholars too much either – as most Sufi’s don’t. He was a Sheik. He was a spiritual master. And nothing of what he ever said or wrote was said or written without having spiritual education and training as it’s purpose.

So if we read his texts today and only say “Mashallah, that is such nice sounding poetry”, then we are missing that whole dimension. That is why, during this symposium, another professor rightly remarked that such an approach simply means we are in love with love itself, but that we don’t take it seriously. It’s a selfish thing while spiritual education can never be selfish. If it serves yourself only, you’re not going to move anywhere. You will stop. So if you leave out that dimension, then you leave out the most important dimension. Those who access Rumi is mostly through reading, therefore also need this other dimension in addition. You could perhaps have it without books, because it’s all the same knowledge that was inherited from the profit of Islam, but to receive it through books without a spiritual master, that’s impossible.

Rumi himself made a distinction in terms of sciences or knowledges. For instance in what he called the science of God (theology or any other kind of religious study) he considered one science or knowledge to be the one about God and another which is not to know about Him, but to know Him. All kinds of attempts to know about Him, serve yourself only. Some are more interesting or more sophisticated than others, and some might be more sincere than others, but in the end, that is the limit.

To pursue knowledge that doesn’t serve yourself means that the academic pursuit of knowledge doesn’t suffice. Then you need another kind of knowledge and that is what I call ‘tarbiya’, which is the Arabic word for spiritual education. So it will be very hard to find someone in the context of this symposium who is able to take that one step – but I too am here as an academic, so I should be careful of what I say of course. (Dr. Stelzer laughs.)

It’s just that it requires an incredible amount of what we call humbleness or humility. Humility, or not being proud is the most difficult thing. That is why all the religions and spiritual traditions say that worst kind of sin is pride. Now for a scholar it is very very difficult to have no pride because that nearly goes against the very point of being an academic.

Rumi’s life story makes this quite clear. He was a scholar too, but when he met Shams Tabrizi, a Sufi Dervish, he said that he broke all the pens and tore up all the paper. He realised from that moment on, that he could not continue in the same way. That’s also the meaning of love, which he so often spoke about. It’s a love that attracts you to someone else and that humbles you enough to let someone else teache you. We can not find out everything by ourselves. Our own search, our own efforts and our own knowledge are not enough.

So we are here in this conference for a good purpose, but it’s limited. I myself am a philosophy professor but from the first moment when I met my Sheik, he told me that he doesn’t like it. He spoke of it as if it was one of the worst things to do. (Prof. Stelzer laughs.)

But he never told me to stop doing it, so here I am after twenty years still continuing to teach philosophy – though I try to combine it all with this other knowledge. Sometimes they are very difficult to combine, if not nearly impossible. But maybe there is also another purpose. Because if you retain that other side as well, then you can come back to the scholars and ‘rattle’ them a little bit. They may not like it, but it is important.

In your presentation you spoke about the need for ‘useful knowledge’, which is of course related to all of this. How then would you consisely summarize the ‘useful knowledge’ which Rumi might offer not only to scholars but to the world in general?

Prof. Dr. Steffen Stelzer is the Chair of the Department of Philosophy at the American University in Cairo, teaching a broad range of different philosophical subjects. Originally German, he moved to Cairo in 1978 and lived there ever since. In Cairo he came into contact with a Sufi tariqat (a Sufi order) and became a member.