The Blues of the Desert 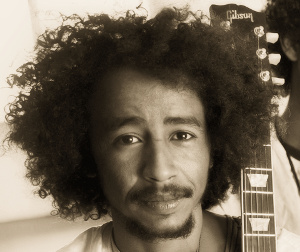 Ousmane Ag Moussa is the fontman of the Malinese band Tamikrest. His songs are rooted within classical rhythms and melodies of the Tuareg tradition. At the same time, however, one can easily discern the influence of great pop and rock icons like Mark Knopfler and Bob Marley in his guitar play. The music of Tamikrest is not just about musical rejuvenation of an old tradition however. It’s also an indictment against the oppression of the Tuareg and a plea for the unity of their community. The British journalist Andy Morgan, who has an extensive knowledge of the politics and music of the Sahara, once described it very poignantly: “In the fight for Tuareg independence, Tamikrest use their mics and guitars as weapons.”

Mali, your homeland, was plagued by much conflict and violence in recent years. What are they about, from your point of view?

The current conflicts did not arise yesterday or today. To truly comprehend them we have to put a large step back into history.

The Tuareg are the original inhabitants of the desert, which they have been traversing for thousands of years. In a distant past, they used to hold the trade of West-Africa in their hands. But they became the political victims of the manner in which artificial boundaries were drawn throughout West and North Africa. The territory in which the Tuareg roamed was divided into different parts and they got spread out over five states: Mali, Niger, Burkina Faso, Libya and Algeria.

The situation differs quite a lot from country to country. The Tuareg in Algeria live a very different life from those in Mali or Libya. You’ll find the biggest problems in Mali. Since the sixties there has been a lot of unrest. Because of the political decisions of the time, Touaregs started to feel like strangers in their own country. They paid taxes, worked and conformed to their obligations, but did not receive anything in return. It all led to a first open battle between the Tuareg and the Malinese government in ’63.

In Western countries we also often get to see news about the violent acts of Islamist groups in Mali.

Indeed. But the political goals of groups like Aqim (al-Qaida in the Islamic Maghreb) have no relationship with the struggle of the Tuareg.

The goal of the Tuareg was their independence. The manner of fighting was completely different as well. In the sixties they still used camels. There were no tanks, machine guns or rocket launchers. These things were all used against the Tuareg and caused many bloodbaths amongst our people. It made many youngsters move to Algeria and Libya who then forged a deal with Gaddafi. But Gaddafi abused this deal to send them to Lebanon and Israel. In the nineties they returned to take up their own battle once more. That’s how a new revolution came about in 1990. In 1992 some agreements were signed that envisioned more self-determinacy and decentralization, but those treaties were never enacted. That’s why we saw new uprisings in 1994 and 2006.

So where do the Islamists come from in all of this?

For more than ten years certain evolutions are taking place that aren’t natural at all. I remember very well how they came to the Kidal region (the North-East of Mali) and pretended to be very religious people. They acted as if they were pacifists. They were Pakistanis, Algerians, etc. They came to the mosques to preach and to deepen the faith of people. At that time, I had no idea what it was all about. But gradually it became clear. Between the missionaries there were many different groups. Some could perhaps have been real pacifists but others traded in drugs and were responsible for kidnapping tourists.

I’m of course not a politician nor an academic who can thoroughly analyze everything on a socio-political level. But I simply look around and I notice that there are different parties. There’s a group that wants to ‘convert’ people to drag them into their system and there’s a group that wants to close the desert. You won’t find much in the desert however. The state never invested in it. Everything you’ll find there was built by the Europeans. There used to be a little tourism as well. Not much, but at least a little. Ever since 2003 all of this started to disappear. The authorities knew what happened but turned a blind eye. They didn’t do any effort for the region and gave free play to the terrorist groups.

In other words, the religious and the political were, as it happens more often and elsewhere as well, got all mixed up?

Indeed. The members of the islamist groups had a completely different goal than what they showed to people. But when someone comes to a Tuareg and says he believes in God, we see him as a good person because someone who believes in God, to us, is someone who doesn’t have any bad intentions, who behaves in a proper way and who we can trust. That’s how they use their religiosity to enter our community and bind many Tuareg to them.  In that manner and step by step they want to implement a strict interpretation of the sharia that was more normal many centuries ago. But why would we go back to that time?

If religion is a gate to the Tuareg community, isn’t there any religious component in the struggle of the Tuareg? Religion can always go in two directions: it can lead towards liberation as much as it can lead towards suppression.  So even though you do not wish to install a caliphate like many islamists do, doesn’t the spirituality of Islam give a sort of sustenance to your struggle for independence?

Tuareg are Muslims of course. More than a thousand years ago we converted. But without war or violence. We chose to be Muslims. To us, it was a tolerant religion. So the struggle of the Tuareg doesn’t revolve around religion. It’s simply about the vindication of our rights. We are the inheritors of the desert. We simply want to be a part of the decisions that determine our future and we don’t want the desert to be taken away from under our feet.

And what does your faith mean to you personally? Is it a source of inspiration for your music?

In all honesty I must admit that my religious side has nothing to do with my music. I am a musician. Period. And my religion is between me and God?

So what is a source of inspiration for your music?

What pushed me into music is the situation of the Touaregs. It’s what I witness and experience every day. And it hurts my heart.

We, Touaregs, are a suppressed and marginalized community. So I have made the choice to be a musician and take up an important role in our society. We don’t have much space in the media or in the Malinese politics. But we have a history, a culture and a language that are very important to us. With our music we protect our memory because we don’t have any archives. It’s the musicians who protect our history.

That history is of course complex and you can’t get to know it in one-two-three. You can only understand it in small bits. It’s a slow process but it’s never too late. That’s also why we go on tours with our music. With our music we make a little piece of tradition travel through the world. Even if the listeners don’t understand our language, the Tamasheq, maybe they get interested. It might seem like something very small, but it’s a little more than before. In that way one song can be the start of a search that leads a lot further.

Many songs on your album ‘Chatma’ sing about the women in the Tuareg community. Even more so, the title ‘Chatma’ is Tamasheq for ‘My sisters’. Does that also relate to the ‘collective memory’ you try to keep alive through your music?

Our women are sacred to us. They are our honor and our dignity. When you touch our women, you touch us. That’s why I wrote many songs about the way in which they’ve become the victims of the political and terrorist groups that want to change their lifestyle.

Nevertheless I see that many women stay strong, remain courageous and withstand all these desperate situations. As such, my songs aren’t only a lament about the injustice that befalls them but also a tribute to their strength.

Yet my message goes even further. It’s also a message to men, wherever they are. Because all men need to be aware of the way they treat women. All over the world, you can find the same problems that we have. In many countries, politicians provoke wars and the greatest victims of these wars are always women – even though they aren’t guilty of anything.

Ousmane Ag Mossa is the leader and main songwriter of the Malinese touareg band Tamikrest. They mix traditional African music with Western rock and pop influences and sing in Tamashek. The youth of several band members was shaped by the civil war that took place between 1990 and 1995. They now want to continue the struggle of their people through music instead of arms.