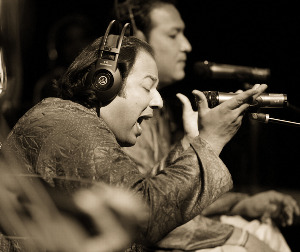 Qawwali music, the devotional music of Pakistan in which spiritual poetry is sung on the backdrop of harmonium, tabla and clapping, was spread to all corners of the world by the great Nusrat Fateh Ali Khan. This revered artist brought the traditional art of Qawwali to a new level and enchanted many audiences all over the globe with this intoxicating music. More than any other contemporary Qawwali singers, Muazzam and Rizwan, Nusrat’s nephews, keep his legacy and spirit alive.

For seven years, they got their initial training in classical music and Qawwali from their father. When he died they joined Nusrat’s group as a student and learned his ‘tricks of the trade’ for one year, until he died as well in 1997. So when I visited Muazzam in his home in Faisalabad, I first wanted to know how much they’re uncle still influenced their own music.

How ‘present’ is Nusrat Fateh Ali Khan, when you perform your Qawwals?

Our admiration for Nusrat is enormous and our love for him remains strong. I’m not talking about the ‘normal’ type of love . In Urdu we call that ‘pyar’. But I’m talking about ‘ishq’, a devotional type of love in which you forget yourself.

Nusrat was an incredible teacher. Even more so, he still teaches us. Whatever we need, we get it. Sometimes he comes to us in our dreams, sometimes we’re inspired during live performances. In one way or another we receive help from him. So we feel like he’s always around us.

It makes me think of what Abida Parveen told me. She said she can’t sing if Ali isn’t there. Is that the same for you?

You know, there are certain personalities like the Panjtan Pak (An Urdu word that combines Prophet Mohammad, Ali, Fatimah, Hassan and Hussain) who transcend us all but it depends how you yourself ‘go’ to them. If you love, admire and follow them, you will feel that they’re with you. If not, you won’t feel them. So in the case of Ali, yes, he got the title ‘lion of God’ and whenever you need help and call him, he will help you.

In a sense, to call upon the saints is one of the functions of Qawwali, is it not?

Indeed. Every music has its own worth but what makes Qawwali into Qawwali is the fact that it’s the music which is linked to the Sufi saints. The great saint Moinuddin Chishti, for example, was told by his pir to go to Ajmer to spread Islam to the people living there. He used Qawwali to do so and it is said that he converted nine million people like that.

Is there any saint or poet who is particularly dear to your heart?

There are some songs from Amir Khusrao which I like a lot and I really love to sing parts of the Masnavi. One particular phrase that is very dear to me is for example: “Main to piya se naina mila rahi”, which you could translate as “I’m going to have eye contact with my Lover.” Though whatever I sing, the moment I sing it, it fills my spirit. In Qawwali we often sing a mix of languages. It can go from Urdu to Panjabi to Persian. The audience often doesn’t understand the language, but they can feel the spirit if it’s properly performed. And you can only perform it properly if you are completely ‘involved’ in the words. You have to be devoted to the saint and his messages at the moment you’re singing in order to truly convey the words.

I’ll give you an example of how deeply the words can penatrate one’s soul. One day, Fateh Ali Khan, the father of Nusrat, was singing with Mubarak, my grandfather. All of the sudden he closed his eyes, his face became red and he started shaking like a bird. He then tore off his clothes and left the Qawwali group while the rest played on. He ran for one kilometer at 2 am at night and jumped into a canal. People took him out and noticed his body was still burning hot. They took him home and after one and a half hour he awoke. They asked him what had happened but he said he didn’t know, that he was in a different state of mind. Our father was also present that night. He told us the story.

In the last few decades more and more people have heard of the trance inducing effect of Qawwali music. But these days Pakistan is not often linked to such beautiful art forms. When Pakistan is mentioned in the news, it is often related to terrorism and violent extremism. I have met many Pakistanis who felt very frustrated about this. I guess you, as a traditional Qawwali singer, know this frustration as well.

But the Sufis are the people who ‘pleased God’ and God was with them. God asked people to go to the saints before you go to Him. God says that if you want to recognize Him, you have to recognize the Panjtan Pak. This is the real Islam and this is the right message. So if all those people go to the shrines of saints and pray to the prophet and his family who were spreading God’s message, they can’t all be terrorists.

The prophet also said that you cannot convert someone to be a Muslim by force. If you think Islam is wrong, you don’t have to except it. If you think it’s right, you have to. That’s the reality of Islam. The prophet asked for love and peace and the ummah should follow what he asked for. So Islam brings a message of peace. All the terrorism has nothing to do with real Islam. It’s all planned by people who are interested in other things than real religion.

Is Qawwali itself under threat of the fundamentalists and violent extremists? Since many of them hold the opinion that music is haram, their violence might be directed at artists like you as well.

We don’t have a problem yet, but when they would start criticizing what we do, we’ll have a very good answer ready for them. Our answer comes from the hadith. When the prophet (pbuh) migrated to Medina, the girls of Medina made tambourines, came out of their houses and sang songs. Some people asked the prophet whether it wasn’t shirk (a form of worshipping something other than God). The prophet replied: “Keep quiet. They’re doing this because they’re so happy and because they want to make the prophet happy. Their happiness is more important for me than your objection.”

If music would be haram, the prophet should have stopped the girls at that time. The prophet and the saints followed God, so if it would be wrong, they would have gotten rid of it. But, by now, Qawwali is in practice for the last thousand years. It was important before and will have a bright future long after we died.

Does that mean that Qawwali is still alive among the young people in Pakistan? Or is it slowly becoming something ‘old fashioned’ like some other aspects of your traditional culture?

Qawwali doesn’t come from normal people. It stems from the Sufis and the Prophet. The first aspect of Qawwali is the praise of God and the second is love and peace. The younger people nowadays are still listening and they still sense it’s something special. It feels like a miracle to them.

Young people in the West are also very intrigued. Often, during festivals, when we start our sound check, people come closer to listen. They are surprised of what they see. We don’t have a lot of instruments – only tabla and harmonium – but our music intrigues them. So one day in Seattle, when we were performing with Nusrat Fateh Ali Khan, the famous Michael Brook heard us and was so impressed by it that he wanted to do something with it. When he did, the project received a lot of attention and lots of people started to love the music.

Of course, for the younger generation, we’ve also worked with groups like Fun>Da>Mental and People’s Colony Nr. 1. They really appreciate the kind of music that comes out of such collaborations.

I’d love to work with the great Bollywood composer A.R. Rahman. We were already planning to meet him when we were in Chennai but it didn’t work out this first time. Inshallah, in the future it will.

One more person I would love to collaborate with is Madonna. In fact, when Nusrat Fateh Ali Khan was sick and in the hospital in London, we heard that Madonna contacted him and said she was interested to work with him. Nusrat wanted to do it. The contract was even signed. But soon after, he died. So perhaps, one day, I could make it come true, ’cause such a fusion would spread the message of the Sufi saints much further.

Rizwan and Muazzam studied Qawwali under their father, who died in 1996, after which they were tutored by Nusrat Fateh Ali Khan until he also passed away. They continue the tradition of Nusrat with world wide performences of classical Qawwali although, just like their master, with an openness to modern collaborations. Works The Rizwan and Muazzam Qawwali group have published several CD’s under the Real World Label. Sacrifice to Love is one of their classical albums. People’s Colony 1 is a modern electronica-collaboration with Temple of Sound.