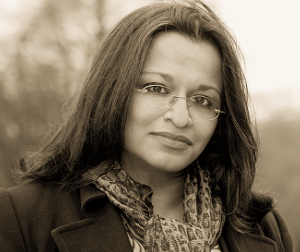 The highly respected Pakistani-British academic, Mona Siddiqui, focusses on two distinct fields of research. As a professor at Edinburgh University, her primary area of interest is classical Islamic law, juristic arguments and the interface with contemporary ethical issues. Her second focus, however, is the theological history of Christian-Muslim relations. Her concern for the subject grew through her involvement in a series of international seminars convened by the former archbishop of Canterbury, Rowan Williams. But it became more than just some side-line interest. She’s the patron, for example, of The Feast, a youth work charity which focusses on community cohesion between Christian and Muslim teenagers. And in 2011, Siddiqui was eventually appointed Officer of the Order of the British Empire for her services to inter-faith relations.

In 2013, Prof. Siddiqui also wrote the interesting book, ‘Christians, Muslims and Jesus’ which delves deeper into the various views Muslims held of Jesus throughout history, and the ways in which these views determined the relationship between the two faiths.

What brought you to study Jesus in Islam?

Through my encounters with many Christians, I simply came to realize that Jesus was the focus of many theological questions and differences between the two faiths. So, I gradually felt the subject needed more attention.

Of course, the Qur’an has a particular theme, which is that Muhammad is walking the same path as the Old Testament prophets, such as Abraham, Moses, as well as Jesus. The Qur’an also relates that Jesus was born to a virgin called Mary, preached God’s word, gathered disciples and performed miracles. Jesus will even return to Earth, according to Islamic tradition, as al-Masih – the Messiah. But the crucial difference from the Christian narrative lies in the essence of prophetic revelation, however. For Muslims, Jesus cannot be acknowledged as ‘the Son of God’. Within Islam, revelation appears but divine distance is maintained, while for Christians, God is revealed in Christ and, as such, distance is overcome. And I find this theological difference in the modes of God’s disclosure quite fascinating.

This poignantly summarizes the traditional Islamic and Qur’anic view on Jesus and you point out the crucial theological aspects that make it different from the Christian view. But how would you describe the symbolic or spiritual meaning of Jesus in the lives of Muslims — if there is any at all?

I could, of course, refer to a statement like Rumi’s that Jesus is a prophet in whom the attributes of God became manifest, but eventually the Muslim community holds Muhammad in ultimate veneration. Even though Muslims revere Jesus as God’s prophet and messenger, there is no understanding of Jesus as God incarnate. It’s only in scholarly debates you’ll find Muslims talking about Jesus from a variety of perspectives. On a daily level, people will simply say He’s one of the prophets. But he has little ‘devotional value’.

So, although Jesus could be a perfect bridge figure between Christianity and Islam, because he doesn’t feature in the daily life of Muslims and because, theologically speaking, He will also always be the quintessential element on which ‘the twain shall never meet’, there is little chance of Him becoming such a bridge figure?

The two don’t have to meet anyway. Dialogue isn’t necessarily about bridging anything. It’s about understanding themes, persons and ways of looking at how God expresses Himself in different religions. So, the interest in Jesus isn’t to say: “Oh, now we’ve reached some good compromise.” Certainly, for me personally, it’s more about trying to understand another way of looking at God, and about wondering how I can make sense of it as a Muslim.

That reminds me of something that happened at an interreligious dialogue group I once attended. The group read and discussed certain passages from both the Qur’an and the Bible that focussed on similar topics. Suddenly, however, the tone of the conversation became quite tense when it got to a very crucial difference between the two traditions: some of the Christians said that God was in need of humans in order to relate to them. For Muslims, of course, this is quite unthinkable. In their view, God doesn’t need anyone. This difference isn’t all that surprising since the Qur’an often emphasises the ultimate self-sufficiency of the divine, while Christianity stems from the very idea that God became human. That was one of the many moments that increasingly convinced me that efforts of interfaith dialogue shouldn’t be trying too obsessively to find common ground. Perhaps more than that, they should, in fact, focus on learning to accept the difference.

It shouldn’t even be about that necessarily. It’s simply about exploring the fact that you noticed a fundamental difference. It might make you wonder how the God of Christians and Muslims can be one and the same if they have such different understandings of God. And it might make you dig deeper into your own tradition as well.

There are many ways of talking about God in relation to sin and repentance, mercy and compassion which open up all kinds of dialogue. There are hadiths that recount how someone went to the Prophet and asked him to give him a prayer that would prevent him from sinning ever again, yet God told him: “Don’t give him such a prayer, for if my servant does not sin, upon whom will I bestow my mercy?” So, does God need us after all, if He wants us to turn to him for repentance?

I remember using such hadiths in a talk once and asking the question, “Does God want us to sin?” There were Muslims in the audience who were annoyed and thought I couldn’t say such a thing. But I can say whatever I want. It’s just exploring the idea. It doesn’t mean I know anything more about God. It’s a theological exercise to see what we can make of such texts and traditions. Constructive dialogue does not reduce one’s faith, it rather enlarges it.

A Muslim could, therefore, say: God has no need. Full stop. But hearing Christians talk about the ‘humanization’ of God can, in many ways, also make you reassess the manner in which you think about God as a Muslim.

But if dialogue does not have a specific goal and is only an exploration, don’t we then deny its capacity to dispel certain prejudices and conflicts?

Of course, if people are getting together in community groups to get to know each other, that’s great. Because at the community level, people might have misconceptions about many things that can easily be clarified by simply talking to each other. But if you do scholarly work, you have to be open to the possibility that there might be no definitive outcome at all.

Actually, one of the pitfalls of efforts of dialogue is the idea that we should reach some kind of goal with which we should all be happy. I’m opposed to a ‘dialogue on the surface’ as well. We need to go deeper. But how do you know you’ve gone deep enough? It makes no sense to say: “Oh, this is deep enough.” It’s just about trying to understand how people talk about the things that matter to us in life. And once you start to look at it like that, you don’t go into any dialogue setting with some sort of intended goal. You’re just there to learn. You’re not there to defend your viewpoint, but to listen to how somebody else is expressing themes that you’re interested in as well.

Which implies you learned a lot through your own interaction with the Christian theological tradition.

Absolutely. And we actually touched on it already: there is a vulnerability in talking about God that Christians have and that Muslims don’t. Muslims are very certain about God. Christians might be very certain about their convictions, but the way they talk about God and His vulnerability is not something that we have in our vocabulary. And that’s quite intriguing. It makes me wonder, most of our convictions about God, are they convictions because that’s really what we believe or are they convictions because that’s what we derive out of centuries of theological thinking? I already mentioned some hadiths, but I could just as well refer to someone like Ibn Arabi who said that God created creation so that creation would love Him. There is vulnerability there. But, on the whole, these questions weren’t the central questions asked by Muslim theologians because they were concerned more with human worship, adoration and love for God as opposed to God’s love for us.

It’s interesting you mention this ‘vulnerability’ as something you’ve learned. During my own journey through Islam, the ‘certainty’ of Muslims and the way they put God so strongly at the forefront have been some sort of ‘mirror’ for me. Even something as basic as the fact that many Muslims pray five times a day continuously challenges me.

A good friend of mine, who’s an American scholar, spent a long time in Jerusalem and has recently gone back to the States. When he gives lectures – often for a Christian public – he sometimes says: “When I hear the adhan, the call to prayer, it always touches me. I’ve been listening to it five times a day for years in a row, but I’m still so moved by the ‘come to prayer, come to prayer’ and when it resounds, I feel like I want to go and pray with the Muslims. But then I stop because in so many inscriptions in mosques it reads: ‘He didn’t begat neither was he begotten.’[1]And that stops me in my tracks because I realize they still deny what is fundamental to my belief.”

I think that’s quite beautiful. He’s not saying he rejects anything, but he’s saying that there is always a certain call in somebody’s faith and it has a way of inviting all of us to look for God. We may not, in the end, respond to it the way a believer would, but the very fact that we’re pulled in that direction is really quite moving.

When we speak of encounters with other religions, ‘being moved’, indeed, seems far more important than being convinced.

Which is why, in some of your writings, you have made a plea for a theology of compassion, rather than a theology of salvation, is it not?

Indeed. It has changed a little, but I think that for too long, traditional interreligious dialogue was about whether someone would be ‘saved’. But how do we talk about people in terms of salvation? You get nowhere with that. In strict Muslim theology, I don’t even know whether I’ll be saved myself – whatever that may be – so how am I making pronouncements about anyone else? In a way, therefore, that’s almost a futile exercise for me. I would never stand up and say: “Jews and Christians can’t be saved because the Qur’an has an ambivalent relationship with them.” The truth is that I don’t know what the truth is. But there’s that sense . . . that sense that God is always present in our own nature as human beings. And that sense makes it possible to relate to one another. So, being in a certain way, justbeing humble for example, is a theological exercise as well — and a very important one for that matter.

[1] A Qur’anic sentence that often places itself within the theological discussion about the nature of Christ and the question of whether or not He is the son of God.