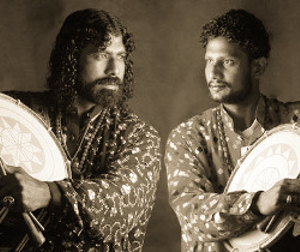 One of the more mind blowing experiences I had in Pakistan was my visit to the shrine of Baba Shah Jamal on a Thursday night. In the cool breeze of the night a smell of hashish invited me into the crowds that were gathered around some drummers. In the middle of the small space ten to fifteen people were spinning around, shaking their heads and dancing wildly. I sat down among the other people, enjoyed the scene and gradually lets myself become enveloped by the entrancing beats of the dhols, the big barrel shaped drums so typical of the region. The drummer was Pappu Saien, who always accompanies the dancers with his frantic drumming during these weekly gatherings on the ground floor of the shrine. When I went upstairs a similar vision awaited me, only now the dholrhythms that were drummed deep into your mind and heart came from the incredible brothers Gonga and Mithu Saien.

A couple of days later I sat together with both Gonga and Mithu, though I could only converse with Mithu. For Gonga is deaf. That might sound a bit strange, considering the fact that the both of them are some of Pakistan’s best Dhol drummers. But it’s true. Although Gonga never loses his rhythm and sometimes even whirls around while playing, he is hearing impaired. I found it difficult to believe.

It’s like a God given gift. He is born deaf, so he can’t speak, but he can play nonetheless. He can hear slight tones and he can make out some sounds of the dhol because it’s a very loud instrument, but he doesn’t hear it like we do. So he mostly plays on the vibration he feels in his belly. And also a bit by ‘sensing’ the mind of the people around him since he can understand the feelings and the signals people give out.

You play hours in a row. Certainly considering the heaviness of the dhol and the intensity with which you play, that’s not an easy feat. Do you take drugs yourself to be able to do that?

No. We don’t take cigarettes, no pan, no bhang, nor anything else. We’re simple people. We don’t like any kind of intoxication. When you’re playing you of course get into a spiritual feeling, but when you get intoxicated, you lose the real sense of it. You have to be pure when playing.

Many of the spectators take drugs however.

It’s our duty to perform at the shrine. That task has been transferred to us by our spiritual leader and our elders. So we don’t care what the other people do. Though I can tell you that it’s not a part of real Sufism to go to the shrines, smoke hashish and get intoxicated. The great spiritual leaders never used drugs. It’s only a small amount of people who go there to get intoxicated.

So if you don’t take drugs, how do you succeed in playing for hours at such a tempo? I play the dhol myself sometimes, so I know that it’s a heavy instrument and that it can be be quite hard to play intensively for a longer time.

It’s our family business. Our grandfathers and fathers already played it and thought it to us. And of course it’s just a lot of training and hard work. I still practice at least two hours every day. But although playing the dhol requires a whole lot of training, it also depends a great deal on whether you received a gift from God and whether your shaykh acknowledges your gift. It’s an internal connection between you, the dhol and God. Another brother, for example, can’t play longer than five minutes. He gets tired very soon.

How long have you been playing the dhol?

For eighteen years. My father also played the dhol at Shah Jamal for many years. But now he’s old and retired, so we took over his duty. As such it remains the art of our family and we feel very blessed that God provided us with the opportunity to live from it and provide our families with a house through it, that it made us travel the world and proudly show our Pakistani heritage. One day we even got the chance to perform in the white house!

It’s been going on for more than a hundred years.

And why at the shrine of Shah Jamal?

Shah Jamal was a great saint who liked to dance to the beat of the drums. That’s how he cleansed his spirit. So in his honor the custom of drumming is continued. That’s also why we sometimes shout during the drumming and the audience answers. When we do that, we call out Shah Jamal’s name, or the name of other high level saints like Shahbaz Qalandar. We try to invoke their blessings like this.

So your dhol drumming is not just a traditional performance. It’s a part of your spiritual life as well.

Of course. The people who are drumming experience the same feelings as the people who are dancing at the shrine. It’s a special state of being which brings us to a different form of worship. It’s a sort of prayer in which we ask to keep us away from sin, to keep us away from the evil eye and to help us lead a good religious life. That’s why we see it as a spiritual duty to perform at the shrine. https://www.youtube.com/embed/hEhoP-n6s1U Dhamal at Shah Jamal

During our talk, Mithu played a song with his hands on his dhol. The singer is one of his brothers.