The language of the Qur’an 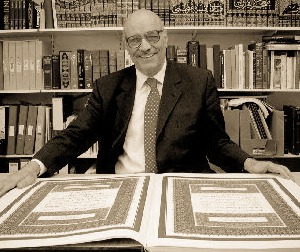 When I met Cyrus McGoldrick, he told me that his favourite translation of the Qur’an was the one by Egyptian born Muhammad Abdel Haleem. I got a copy and quickly became just as impressed. One of the most remarkable aspects of the translation is the fact that it doesn’t use any verse structure but is written as if it were fluent prose. In accordance with this stylistic choice, the language itself is free from the archaisms or awkward grammatical structures that are often found in other translations. As such, Abdel Haleem’s translation excels in its transparent tone. Add to this the concise but tremendously interesting introduction and it becomes clear that it’s by far the most accessible version for any contemporary English audience.

I met professor Haleem in his office at the London School of Oriental and African Studies, eager to know his views on the relationship between the text and context of the Qur’an.

In the Christian tradition, certainly today, the scriptures aren’t seen as direct words of God but rather as works that are inspired by the Divine Spirit. It’s a core element of the Islamic faith, however, that the Qur’an is a divine revelation. Yet, the Islamic tradition also recognizes the difference between ‘revealed’ and ‘inspired’ texts. So, how can we be certain that the Qur’an truly belongs to the first category?

My colleagues in oriental departments might say that it was, in fact, Muhammad, or even others, who wrote the Qur’an. The theological tradition, on the other hand, maintains that he received it from an archangel who delivered it to him from God. But, as a scholar of linguistics, I deal with this only from the linguistic point of view, and I can see that what Muhammad received in the ‘state of revelation’ was very different from his normal language. We can see, for example, that the Qur’an is clearly of a higher level than the language of the hadith. We also know what Muhammad was capable of. We know that until his forties he didn’t write any poetry and that he never gave speeches in public. It makes one wonder, therefore, how he, all of the sudden, could start to recite the verses of the Qur’an. The Muslims of the time said that the language came from God. The non-Muslims, however, said that he was a poet or that he had a jinn[1] who told him to say all the things he said. But whatever their explanation, they agreed on one thing: that the style of the Qur’an was much higher than the language people were used to. I have read the Qur’an for such a long time and I know it by heart but still, every day when I read the Qur’an, I discover new meanings in certain verses which I hadn’t seen before. That’s a special quality of the language of the Qur’an – even apart from the faith.

And what about the structure and redaction of the Qur’an? In what measure were they influenced by people and context instead of divine revelation? The different revelations weren’t put in chronological order, for example, and the surahs[2] are ordered longest to shortest. That implies quite some ‘human’ influence on the eventual Qur’an, does it not?

I am convinced that there is a great unity in the material of every single surah. People often think it’s a jumble of things, but it isn’t. Through long studies of the ‘linguistic habits’ of the Qur’an, I can tell you that it is meticulously put together. The particular order of the surahs is a different story, however. Even Muslim scholars themselves have differing views on it. Some say the whole Qur’an is structured according to divine inspiration; others say that the specific arrangement of the surahs was the personal opinion of some of the Prophet’s companions. These discussions have been going on for centuries.

But if there might have been such an influence in the order of the surahs, why would we not go one step further and also suppose that, in the course of history, certain words might have changed or that some sentences might have been altered?

I am convinced that the Qur’an, as we know it now, is exactly the same as the Prophet recited it and I base this conviction on several arguments.

First of all, we have to consider the length of Muhammad’s prophethood. Jesus only had two and a half years to complete his mission, but Muhammad was there for twenty-three years. In the last ten years, he had thousands of companions and he was with them every day in the mosque, reciting the verses to them and making sure they had understood it correctly.

Second, in the Arab culture of those days, everything was learned by heart. Their genealogy, their history, their poetry, and so on, they memorized it all. And the Qur’an is only about five hundred pages. If we divide this over twenty-three years, two or three pages each month, then it becomes clear that it’s really not beyond people’s capacity to learn the Qur’an by heart.

Third, we have to keep in mind that people believed it was the word of God, because people who believe it’s the word of God will exert great efforts in learning it properly. If you think how the first Muslims sacrificed themselves completely for the cause, it is difficult for me to imagine that they would deliberately change the words or concoct certain adaptations. That does not make sense. It makes a lot more sense to think that they would go to great lengths to retain the words exactly like the Prophet had told them.

On top of this, the Qur’an was put into writing on sundry materials during the lifetime of the Prophet. Only fourteen months after he died, a situation arose where everything had to be brought together and written down in one volume. Then, twenty years later, that first volume was copied and verified and six more copies were made. Nobody has ever dared to change anything in those texts. Even the orthography has retained peculiarities which no longer exist in Arabic writing but haven’t been changed in the Qur’an.

Lastly, we shouldn’t forget that the Qur’an, unlike all other scriptures, right from the beginning, was always protected by the heads of state. So, its integrity was always closely guarded by those in power.

Did this consideration influence your translation as well?

As you know, the Qur’an recognizes the scriptures sent to Moses and Jesus and acknowledges the prophets of these traditions. It says that all prophets came with the same message: to believe in one God and call people to act according to His law and it confirmed that they would have to account for their deeds on Judgement Day. That certainly affects my view. People often forget that the Qur’an calls upon Jews and Christians to stick to the teachings sent to them by God. So, as a Muslim, I would also like Christians to be very good Christians and Jews to be very good Jews. Some aren’t, but I have also had the good fortune to meet some Christians that truly were living saints. I have met more Christians than Jews, but I’m certain there are saintly Jews as well. So, I don’t condemn or judge people on the basis of their faith because I know from the Qur’an and the hadith that only God has the sole right to judge who goes to hell or paradise. No-one else can claim this right.

Would you say that this premise makes your translation different from the others?

Yes, but I only take this premise because it is a principle that the Qur’an itself expounds. Some people wrote to certain governments in the Arab world to say that my translation shouldn’t be allowed because it was too lenient and liberal towards the Jews and the Christians. But I produced a very convincing counter argument from the Qur’an itself and it was accepted. They even bought a large amount of copies for distribution. (Muhammad laughs.)

In my translations, I always keep in mind what the Qur’an says in other passages. In this case, we have to refer to the beginning of chapter 2, verse 26, where it is said that God leads astray only those who already choose to be astray. On top of this, linguistically speaking, this particular form of the verb can also be translated in the sense of: “He finds them misguided or astray.” So, yes, it’s less direct than is often translated.

Another part of your translation that struck me was the way you translated Al-Fatiha.[3]Your translation reads: “In the name of God, the Lord of Mercy, the Giver of Mercy! Praise belongs to God, Lord of the Worlds, the Lord of Mercy, the Giver of Mercy, Master of the Day of Judgement. It is You we worship; it is You we ask for help. Guide us to the straight path: the path of those You have blessed, those who incur no anger and who have not gone astray.” I was especially surprised by your choice of the expression ‘those who incur no anger’. Most translations state something like ‘those who have evoked Your anger’. In a footnote, you also add: “Note that the word ‘anger’ is not attributed to God, as it is in many translations.” Again, a small but very significant change.

I can bet anyone a million dollars that I’m not mistaken, because it is as clear as a summer sun in the Middle East that my translation concurs with the original Arabic Qur’an. But previous translators have always written what was written by others before them, without looking at what was really there in the Arabic. God isn’t mentioned. It doesn’t say that God is angry with them. It might say ‘God is angry’ somewhere else in the Qur’an, but not in the Fatiha. The important thing is that God is presented as loving, compassionate, merciful and guiding. So, the old translations jar with the main picture which is presented in Al-Fatiha.

I would guess that it sometimes seems almost impossible to find the proper translation for certain words and sentences since, as this example shows, translation often also implies interpretation.

The arrangement of the words in the Qur’an, indeed, brings a richness of meaning which you can’t possibly bring into the English, because the same statement in Arabic can have three or four different meanings which are all relevant. So, after you have done everything you could to translate it as properly as possible, you’re still disappointed. English simply doesn’t have the same words with such a multiplicity of meanings and you end up selecting only one layer of meaning. An Egyptian scholar from Oxford called me up one day and asked about the translation I made of a particular verse. After I told her, she said: “The Arabic is so much better.” But I replied to her: “Listen, I never claimed to be as eloquent as the author.” (Muhammad laughs)

[1] A jinn is a supernatural being from Islamic mythology and theology. It’s a sort of invisible spirit that can also take hold of human beings. The English word ‘genie’ is derived from this Arabic word.

[3] Al-Fatiha is the opening chapter of the Qur’an. The translation quoted is taken from M.A.S. Abdel Haleem, The Qur’an. A new translation, Oxford University Press, 2004.