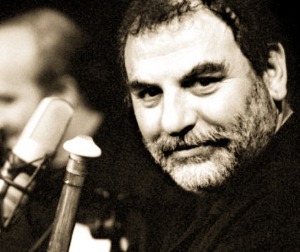 Kudsi Ergüner is a contemporary master of classical Ottoman Sufi music. From an early age, his father taught him to play the ney, the reed flute which is ever present in Turkish Sufi music. It was the time when the young Turkish secular republic wanted to break with its religious past, deemed the old traditional Sufi rituals forbidden and disbanded the Mevlevi order. However, because Kudsi belonged to the Ergüner family, he had the good fortune to be surrounded by the last people who held the key to this Sufi tradition. Away from the supervision of the state, they secretly held their rituals in small places in Istanbul.

These days, Sufism and Mevlana Rumi are all around in Turkey, from little dolls in tourist shops to big discussions on talk shows. I guess that’s quite different compared to the time when you grew up in Istanbul.

Looking back, it was a very interesting period because we formed a bridge between the old traditions and the present day, when different religious organisations are once again allowed. But nowadays, Sufism is much exploited politically – not only in Turkey but worldwide. In the supposed conflict between the secular West and the Muslim world, Sufism is presented as the ‘modern’, ‘light’ or ‘open’ version of Islam. Yet, Sufism is pure Islam just like any other form of Islam. So, you can’t try to solve the problem between the West and Islam – which I actually think is more a problem of modernity, capitalism and geo-politics than of religion – by acting as if Sufism is less ‘strictly’ religious. There is no Sufism without Islam and there is no Islam without Sufism. Today, however, people want to create a new sort of Sufism, which relates more to commercialized spirituality and New Age.

Real Sufism is a sort of ‘self-education’. The human being is in between being an animal and a human being, and in Sufism, it is believed that the real reason for our creation is ‘to become human’. The context of the Sufi tariqas[1] is, therefore, to help people find this necessary education and elevation. Yet, many people who supposedly talk of Sufism don’t refer to this inner work. They only say, ‘oh, we love each other’, ‘oh, we are so tolerant’, and so on. But for me, this is a ‘Catholic’ version of Islam. Of course ‘love’ is the main topic of tasawwuf. But the love that the Sufiya of old generations were talking about is not the same love that those people speak of. The love of the Sufiya is a love for God that brings us beyond the ego.

Is your music a way for you ‘to become human’? Do you see it as a tool to ‘transcend’ your ‘animal self’?

We can’t give a reason for everything we do. Of course, some people explain their acts with big words, but I’m not like that. I’m a musician and I love music. That’s it.

I am, of course, convinced that the early Sufis were deeply affected by the music they made. It was not just some frivolous enjoyment but a deep experience. Today, it is very rare for people to have such a deep feeling and deep understanding of the music, but the repertoire is there and it’s a beautiful repertoire. So why wouldn’t we play it, without any pretention?

As a musician you also seem to have a great interest in mixing your music with the music of other cultures, like the way you fused it with jazz or French renaissance music. Isn’t it sometimes very difficult to fuse different sets of musical systems?

If you remain sincere with yourself, if you have something to say through your music, and if you don’t mindlessly imitate others, then there doesn’t have to be any problem at all. Yet, I think this is a philosophical problem that does not only apply to music and which is of particular importance today. Can one person live in the UK, Belgium or France, but still remain Turkish? In Europe, more and more, people want you to assimilate. So we have to ask ourselves: What makes me myself? What do I need to retain to remain myself? That means you have to eliminate certain unnecessary things that aren’t very important and keep other more essential things. It’s the same in music. For example, we can’t leave our intervals. Each maqam, that is to say, each melodic phrase has specific intervals, but if I give them up to go easier with the European intervals, I lose myself. In none of my albums, therefore, do I abandon those intervals.

When I left Turkey in the seventies it was a bit like the Soviet bloc. The country was very closed up and constantly trying to protect itself from other countries. But after the eighties, it wasn’t possible anymore, neither economically nor culturally. So, what happens is that the dominant culture of the world, which, right now, is the Western commercial culture, invades countries like Turkey. That is why I believe artists have a duty to underline the differences, to insist on particularity and, in so doing, protect our identities from this invasion of commercial ‘mass culture’. I take that duty upon myself as well, because I want to say to people that, if we want a new global culture, we need to respect others and ourselves.

That brings us back to the contemporary interest in Sufism, for can’t the teachings of the Sufiya be of much help in this matter? Don’t they contain a lot of elements that oppose such a consumption culture?

Most certainly, but sadly enough, that’s not what we’re talking about when we speak of Sufism these days.

Some claim they know something about Sufism simply because their grandfathers were Sufiya. Others claim they’re ‘masters’ and that they have special powers which can cure people. But neither of those groups teaches the real tradition of Sufism. They only tell their own theories and ideas.

Still others refer to Turkish tradition to claim their authority in the Muslim world. However, in Turkey, there has been at least fifty years of ‘nothingness’ during which the tradition wasn’t continued, so such references are simply false.

You refer to the fact that the line of the Mevlevis had been cut so that the tariqa, in fact, doesn’t exist anymore. How does that make you feel about the Mevlevi Ensemble of Konya that tours around the world?

That ensemble is nothing more than a group of people who work in the Folklore Department of the Ministry of Culture. So, it’s more a matter of tourism than tradition, although they act as if the people in the show are real dervishes.

In the seventies, I toured around the world with my father to give the first presentations of sema, the ceremony of the whirling dervishes. We were honest about what we did. We simply wanted to show the tradition and let people know that it was forbidden in Turkey. But then, all of the sudden, the Turkish government took it over. They didn’t do it to tell about the tradition. They used it to sell their country.

And what is your opinion on those DJs and musicians who try to explicitly mix the traditional with the modern by mixing club beats with Sufi elements?

The problem is that when you say ‘Sufi elements’, in fact, those aren’t ‘Sufi elements’. Sufi music is a particular repertoire, composed on the poetry of the Sufiya. It is very subtle, solemn and majestic. So, it is not because there is some ney in it or some specific singing that it’s Sufi music. Their music is only dance club music, and that’s how it should be seen.

Sometimes some of these musicians feel a bit offended when I say such things, but I don’t mean to criticize their music in itself. It isn’t my personal taste, but it’s the taste of others and that’s fine. All I say is that we shouldn’t call it Sufi music because it lacks the codes of true Sufi music.

What bothers me a bit, however, is the fact that such practices might become an obstacle for those who are truly interested in Sufism. All these things that dress up as Sufism, while they are not, keep people away from the real thing.

Is it impossible, then, to find ‘the real thing’ in Turkey?

If we want to search for the real literature of the Sufiya, there are, in fact, many works available. You don’t have to be a mystic yourself to enjoy the poems of Attar or Rumi. And their works can easily be found, also in translations. The problem is, however, that people don’t read Rumi’s books. They read the books of others who wrote about Rumi. Yet, books about the great masters are not the same medicine as the works of those great masters themselves.

I readily agree. Often people don’t make the effort to read the classics, even though they contain beautiful treasures. In Rumi’s Masnavi,[2] for example, I really love its famous opening verses, the ‘song of the reed flute’ in which he describes the sound of the ney as an expression of the longing for God. It voices the feeling of separation between the soul and the divine. Is that a feeling you also try to evoke when you play?

The human being has some sort of secret nostalgia within himself. Perhaps the sound of the ney can awake this feeling. But when Rumi speaks of the ney, he does not do so because of its sound. The importance of the ney lies in the fact that it is made from hollow reeds. The metaphor is that those who want to be open to the high inspiration, need to be clean and empty like the insides of the reed flute. You have to become like the ney. You have to let God blow through you.

As such, if there is no ney, you can’t properly perform the ceremony because when the ney isn’t played, there is separation; when the ney is played, there is unity. Separation is the life of this world. Since we are here, we are in separation, but we have this innate yearning for unity. The famous Persian poet, Saa’di, described this theme of union and separation most beautifully. He tells the story that he entered the rose garden and saw a nightingale with a rose in his beak lamenting about his separation from the rose. So the poet says to the nightingale: “I don’t understand. You are in a rose garden, with a rose in your mouth, but still complain about your separation from the rose.” The nightingale replied: “It’s a game between us.”

[1] A tariqa is a school, brotherhood or order. Therefore, in the context of Sufism, it refers to a spiritual community lead by a shaykh whose teachings are in accordance with the teachings of the founder of the tariqa.

[2] Rumi’s most important work. It will be discussed later in my conversation with Abdulwahid Van Bommel (see p. 153 and the following).