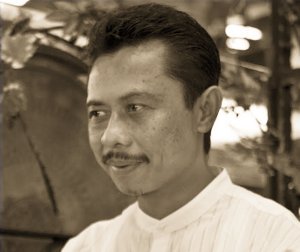 Imam Shamsi Ali is one of the proponents of interreligious dialogue in the US. He was born in Indonesia however and he received his studies in Indonesia as well as Pakistan. For a while he was also a teacher in Saudi Arabia. He only moved to the US in 1996 when he was invited by the Indonesian ambassador to the UN to work for him. But soon he realized that he wasn’t really cut out for politics. He wanted to focus more on religious work for the community. At that time the Indonesian community had a small mosque in Astoria Queens. So he got involved in it and did his work in all calmness.

And then 9/11 happened. Everything changed. All of the sudden he had to represent the community at the interfaith center in the religious leaders’ response to the tragedy. People invited him to a couple of important public moments and he was one of the two imams that accompanied the president on his first visit to Ground Zero after the attacks. From then on he was asked to speak at different churches and synagogues. So when I met him in New York, I took it as a great opportunity to have a conversation about the difficulty and beauty of interfaith work. The topic quickly led to the importance of addressing the conflict between Israel and Palestine to ameliorate the relations between Muslims and Jews.

It’s a recurring theme when we speak of Muslim-Jewish relationships: the conflict between Israel and Palestine. Doesn’t it block interreligious efforts from the start?

It’s true, many Jews feel that Muslims hate them and that their books are very anti-Jewish. A lot of Muslims on the other hand believe the Jews want to destroy them. Whatever problem hits the community of the Muslims – whether it be war or poverty – some of them claim that it’s all orchestrated or organised by the Jews.  So we most certainly need to address these ideas. And we do indeed honestly and openly discuss the conflict between Israel and Palestine in our interreligious meetings. We do not want to fuel the conflict further but we are trying to find new ideas to solve some problems.

But can a group in New York truly do something about those problems which are, after all, conflicts in other countries?

I genuinely believe that interfaith work is of great importance in any part of the world. Because even if political leaders like Netanyahu and Abbas decided to agree, as long as the people themselves aren’t ready, the peace will not be lasting. With interfaith work, however, we help the people to trust each other and to learn that you can live as good neighbors. Not necessarily because you agree on everything but because you respect one another. And that process needs a willingness of sacrifice. I personally believe that in order for them to achieve peace, they must go through a painful path. None of the sides will be able to achieve everything they want. They will have to sacrifice certain things for the greater purpose.

Yet what struck me when I went to the Middle East in the beginning of 2012 is that I sensed that both sides often truly want peace. That contrasts with the way non-Palestinian Muslims deal with the Palestinian issue since they often seem to be more ‘Palestinian’ than the ‘Palestinians’. Our words are harsher and sharper which makes the Jewish community angrier. Same thing on the other side: some Jews in the US are more ‘Jewish’ than the Israeli Jews.

For example: one day when I told my community I wanted to go to a synagogue for the first time, an Egyptian Muslim stood up and said: “Are you sure they will open the door for you?”. I asked him what he meant and he replied: “Jews think they are the chosen ones.” He meant that they feel superior and will look down on me. So I smiled and said: “Open the Qur’an. Look at chapter 3 verse 110 and you will see that it says: ‘you are the best of communities raised up for men.’ So if we claim to be the best community and they claim to be the chosen ones, why would the best not meet the chosen? It’s a good opportunity.”

I went to the synagogue and gave a speech. After it, a women in the synagogue stood up and said: “We will never have peace between Muslims and Jews.” I asked her why she thought so. “Because you guys have madrassas where you train your kids to hate and kill us” she said. So I answered: “First of all, I’m a madrassa student myself and I’m not here to hate you neither to kill you but I’m here to extend my hand.” After that I asked her how she got to that idea. And she said she watched a certain movie. So I said to her: “You know what, before I came to New York, I also watched movies about this city. And what I saw in the movies was all about killing, subways and shootings. Very scary actually. If I took a conclusion from that kind of movies, I wouldn’t be here today.” That woman afterwards became a friend and she came to the mosque.

Did you encounter a lot of friction like this when you started to walk down the path of interreligious dialogue?

To build bridges of cooperation – and I use the term ‘bridges of cooperation’ deliberately, because they are not just bridges of understanding – is indeed not an easy path. You encounter quite some opposition on both sides because people sometimes think that you have a hidden agenda. Or they think that the rabbis only work together with you because they secretly want to find out things about the community in order to inflict damage upon it. If you google me, for example, you will find forums and texts saying that I’m disloyal or that I’m too Western. Some people also question my work with the NYPD – although my work with the police is strictly to educate them on certain matters.

So in my experience you first always encounter some distrust and friction. But eventually my efforts paid off and I could convince many communities of the value of interreligious dialogue. With a proud heart, I can for example point at the twinnings. Those are community-moments where one day a group of Muslims will visit a synagogue, and another day it’s the other way around. We share food and talk about many things. So these events are meant to make synagogues and mosques like ‘twins’. In 2008 we had fifty mosques and synagogues participating in such twinnings. In 2009 we had doubled the number to a hundred and in 2010 we even had twinnings in France, the UK and Russia.

After all those years of efforts like this, what do you think is the best way to come to more understanding between the different communities?

I guess one of the elements that convinces most people are good examples of effective cooperation. For instance, lots of Jews stood together with Muslims in defending the Park51 project, which is often referred to as the ‘Ground Zero Mosque’. Many Muslims were even more hesitant about it. They asked why we should insist on the project and not just put it a couple of blocks further. They didn’t want to create any more problems since they feel they’re already facing enough. But lots of non-Muslims, including Jews, were there to defend their rights.

And when Peter King organized his highly controversial hearing in Congress called ‘the radicalization of America’s Muslim community’ during which the message would be brought that almost every Muslim in the US was a potential threat. A good rabbi friend of mine, Rabbi Marc Schneier, the vice-president of the World Jewish Congress, proposed to do a rally called ‘Today I’m a Muslim too’. He organized it together with Hip-Hop mogul Russel Simmons (who calls himself a non-religious practitioner of Yoga). Because of their efforts, a thousand people of different faith communities gathered to proclaim how such an attack on the Muslims was an attack on all Americans.

That needs to go both ways of course. So when the dramatic shooting in Toulouse took place on the 19th of March 2012, during which the perpetrator – who admitted to anti-Semitic motives – killed four Jews in the Ozar Hatorah school, I was the first to issue a statement condemning it very, very strongly.

I guess such events opened many people’s eyes to the results of the interreligious dialogue that had been going on before.

But besides such expressions of solidarity it’s equally important that we keep the discussion going. We need to do so on the basis of our own religious fundaments and within our own communities. For example, I often tell people that we do not find a passage in the Qur’an that says: do not engage with other communities. There are indeed critical verses about Jews. But those verses are not about Jews in general. The Qur’an is only critical about Jews that do not follow Moses. It rejects hypocrites in other words. But the prophet made treaties with any one, also those that chose not to follow him. So I do not see why we can’t do the same.

Imam Shamsi Ali is director of the Jamaica Muslim Center in Queens and serves as an Advisory Board member to numerous interfaith organizations, including the Tanenbaum Center and Federation for Middle East Peace. He is also Chairman of the Board of Trustees for the Asean Muslim Federation of North America and the Indonesian Muslim Society in America.Since 9/11 he had a specific focus on interfaith work.