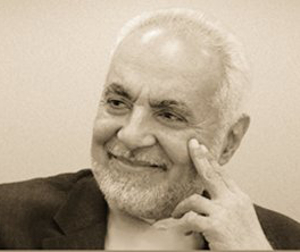 Feisal Abdul Rauf is the sort of religious leader that gets asked to give a lecture at the World Economic Forum at Davos. In 1997, he founded the American Society for Muslim Advancement (ASMA), he has been Imam of Masjid al-Farah in New York City, he sits on the Board of Trustees of the Islamic Center of New York and he is the chairman of the Cordoba Initiative, a multi-national, multi-faith organization dedicated to improving understanding and building trust among people of all cultures and religions.

In the whole debate around the Park 51 project, which some people called the ‘Ground Zero Mosque’, tensions rose quite high. Consequently, your message often got lost. Yet, if you’d like to summarise that message in all quietness, how would you phrase it?

An honourable goal, to say the least, but not an easy task. The fear of Islam seems to envelop ever more people.

Islamophobia is, indeed, on the rise, but I think that acceptance of Islam is as well. What is important, however, is that we develop an ‘American Islam’ – or a Belgian Islam, a French Islam and a German Islam for that matter. What I mean by that is not that the theology would be different, but that the jurisprudence, the laws, the cultures and the practices would vary according to the context.

I base this upon the history of Islam itself. Islam spread from Arabia to Egypt to Byzantium to Persia to India to Africa. And it expressed itself in all of those cultures through different forms of architecture, calligraphy and music. So, we as American Muslims – or European Muslims – also need to develop a personal American Muslim – or European – identity that expresses itself through the culture of our context.

As far as I can see, this cultural reinterpretation of Islam is already happening. Many people look for new ways to adapt the basic essence of Islamic living and practice to the new contexts of the modern world. Yet, I mostly perceive it within migrant communities. Although many migrants still look towards the scholars of the East, I have the feeling that a lot of novel ways of thinking about Islam come from Muslim scholars in the West.

You are right about that. In the West, there is a lot of intellectual and academic freedom. Muslim scholars in the West can write more freely. Look at someone like Rashid Al-Ghanoushi, who was previously living in the UK. He returned to Tunisia after the revolutions of the Arab Spring, but before he could only express himself freely from the UK. That is, in fact, why he said that the UK is an Islamic state. In doing so, he referred to an element of Islamic law to back up his argument since the classical definition of Dar al-Islam[1] calls any country a part of the Dar al-Islam where Muslims can perform their prayers, can go to the Friday sermons freely and can bury the dead in Muslim cemeteries. So yes, it is in the West that many new ideas and initiatives are surfacing and the West can, indeed, be viewed as a part of Dar al-Islam.

You belong to a Sufi brotherhood yourself. Do you see a specific place for Sufism in the many changes the Dar al-Islam is going through at the moment?[2]

Sufism exists all over the world, and I think it’s an important part of our faith since it is the spiritual dimension of our faith.

In any authentic spirituality there is an experience of God. As a Muslim, I’m supposed to ‘bear witness there is a God’. But how do I ‘bear witness’? Unless I learn to experience his existence spiritually, all I’m doing is acting like a parrot – repeating words. So for me, it’s through Sufism that you gain a genuine experience of the faith.

Do you then see the mystical dimension as the common ground between religions?

Mysticism can be such a common ground, but there’s much common ground on the ethical level as well. The golden rule, “do not do unto others what you do not want others to do to you”, has come to all religions and, thus, offers a very powerful basis for commonality. On top of it, within Abrahamic religions, there is of course also the belief in one God. So, there are actually a whole lot of different elements that offer possibilities for a deep rapprochement.

And the differences, well, those should be celebrated. It’s not because you’re Belgian you can’t enjoy Turkish kebab or Baklava. And the same is true for music, rituals and so on. Most things simply aren’t exclusive.

Considering there is so much common ground, how then do you reflect upon those situations in certain countries where converting to another faith as a Muslim is penalized – sometimes even with a death sentence?

That is simply wrong. It’s an incorrect interpretation of old laws. Every instance where, in the Prophet’s time, conversion was related with the death penalty went together with treason. It happened during a time of war between Medina and Mecca, where apostasy wasn’t just apostasy. It was treason because they were people who had first left the community and then fought against the community. That kind of treason has always been a capital crime – even in the United States. But when the Prophet finally made a treaty and peace with Mecca, he even agreed in writing that anybody who had left the Muslim community could peacefully go back. That is why one of my friends, who’s a judge in the high court in Pakistan, says apostasy simpliciter, that is to say, the act of leaving one’s faith community is not a punishable crime. Of course it is the biggest sin and God will punish it in the hereafter, but we have no authority to enact any punishment. Just like it is a sin not to pray, not to fast, to eat pork, and so on. Those aren’t sins that we can punish because they aren’t sins that hurt anybody. The only sins which are punishable on earth are the sins that hurt people, like killing and stealing.

Do you truly believe that God, in the hereafter, will in fact punish those people that were Muslim but converted to another faith when they found love and light in that faith?

I personally believe that whoever follows his conscience is a Muslim in God’s eyes. You can be a Muslim in the sense of ‘following the tradition of the Prophet’, but that is not entirely the same as being a believer in God. A real Muslim is ‘someone that submits’. So, the person that believes in God and the last day and does good has nothing to worry about because God defines your religion upon your belief in Him and your ethics. What you call yourself is immaterial.

I hear a plea for a religion of genuineness, lived from the heart and soul . . . As a contemporary Christian, I can, of course, relate very easily to the idea of sincere faith and ethics as the basis of religion, but within the Qur’an, one also constantly encounters the concept of taqwa, which is mostly translated as ‘the fear of God’. And that’s a concept I am less acquainted with. It used to exist, of course, within the Christian tradition, but today it’s less at the forefront. Even more so, it seems rather counter-intuitive to my perception of God as an infinite source of love. How do you, as a Muslim, reconcile the love for God and the fear of God?

Fear and love are in fact flipsides of the same coin. When you love someone very much, you fear hurting them. And when you’ve done something wrong that might hurt the one you love, you feel bad about it and fear the reaction. So, the more you love God, the more you fear doing something bad. When you’re going to the office of a very powerful person, you want their love, but you also fear their office and their power. And God is the absolute power.

It is like when you see somebody who is so tremendously intelligent or magnificently beautiful that whatever is in you somehow submits and prostrates in front of that person. I remember meeting such a person at Colombia University who I thought was an absolute genius and I could feel my mind and my brain somehow prostrate and bow down in front of his brilliance. So, it is a positive fear that makes your heart go into prostration when you see an immense amount of beauty.

In fact, ‘taqwa’ means ‘to protect yourself’. As such, it does not just mean ‘fear of God’, but also ‘to protect yourself from God’. It’s a bit like the sun. We love the sun, but if you sit in the sun too long, you get sunburned. So, however much you want to be in the sun, you also have to apply a bit of lotion to protect yourself. And God is more radiant than a million suns. So, if you don’t fear the intensity of the divine, you will get burned. That’s why God says: ‘watch out, beware of my power and protect yourself’. He even tells us which lotion to put on to protect ourselves: ‘be good, love one another’, and so on. The spiritual ethics of religion are the protecting lotion of the believer.

You know, the word ‘love’ is difficult. When you say, ‘I love döner kebab’, ‘I love Mozart’, ‘I love Armani’ or ‘I love my wife’, you use the same word ‘love’, but what does it really mean? What is the dynamic? What is the interaction? When I say, ‘I love my wife’, it doesn’t mean I’ll cook her, chop her up and eat her like a döner kebab. So what is love? Love is a function of the lover and the beloved. And the nature of the dynamic can be different even though we use the same word. So when we say we love God, what does it mean? How do we love God? Is it the way you love your wife? The way you love Mozart? The way you love döner kebab? We use words like love, fear, surrender and so on, but in the context of God, they have much more complex meanings. They have much richer and deeper meanings. And they have a bigger spectrum of meanings because God is the source of everything. So, when you use this terminology of ‘loving God’ and ‘fearing God’, it’s more than loving your wife, music, food, mathematics, novels and so on, and yet, it has aspects of all of that.

[1] Literally ‘Dar al-Islam’ means ‘the House of Islam’. It is a term used to refer to the ‘world of Islam’ or, put differently, those areas in the world where Islam is practiced.

[2] Sufism is commonly referred to as ‘Islamic mysticism’ but, although it’s a very popular aspect of the Islamic tradition in the West, it is often very misunderstood. In my conversations with Peter Sanders, Abdal Hakim Murad, Abdulwahid Van Bommel, Kudsi Ergüner and Dr. D. Latifa, I go much deeper into the concept of Islamic mysticism and the misconceptions surrounding it. But at the time when I met Imam Feisal, I had not yet grasped certain elements of the Islamic tradition in general and of Islamic mysticism in particular. The manner in which I posed the question thus reveals how I still lacked a more thorough comprehension of its particular (and very important) place within Islamic spirituality.