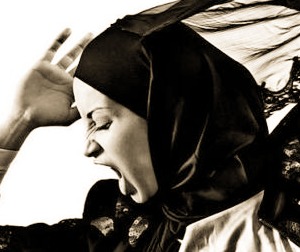 Fatima Rafiy designs headscarves. And not just any headscarves but, if you ask me, the headscarves of the future: traditional yet fashionable, practical yet creative, concealing yet feminine.

From the moment I saw some pictures of her work, I was impressed by the way she created a new style for this particular garment, that often brings about heated societal discussions in many countries. When it turned out that the designer and her company Noor D’Izar are from my own country, Belgium, a meeting could no longer be postponed.

As you’re designing headscarves every day, don’t you sometimes get tired of the way headscarves often serve as symbols of political debate that divide and oppose many communities all over the world?

I’m not into politics, really. I stick to fashion. I’m open to everything that’s going on in the world of course, also when other religions are involved, but the political confrontations are a bit beyond me. I respect everyone and the only thing I ask is to be respected as well.

Before, I could get quite angry about it, I must admit, but that changed when I got the idea to start as a designer and to make the headscarf a bit more fashionable. I hoped that their jaws would drop to the floor. I wanted them to stay behind speachless.

So you wanted to breach the discussions by making the headscarf a fashion item?

Indeed. Often people say that Muslim women wear headscarves because they’re suppressed by men. And of course there are some women that are being suppressed. You’ll find that everywhere. Certain men are also suppressed, for that matter. That’s too bad of course, but they shouldn’t generalize such problems. Our faith doesn’t allow any suppression anyway. It’s the laziness of the media to always make the connection between Islam and suppression. With my headscarves I wanted to do something about this image. I wanted to let them radiate power. 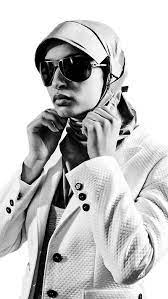 If we don’t look at what all the scholars said, for a second, what do you personally think as a designer: is it a religious duty or not?

I’m a mother of four myself, I’m married and I work together with two men in my own business… A headscarf shouldn’t stop you from doing anything. It all has to do with the person and that person’s faith. Carrying a headscarf is a rule like there are many in different religions. You can discuss it between a man and a women or you can draw your own conclusions and decide when to wear one yourself. I have three sisters and none of them wears a headscarf. Even more so, I only carry one since I became about thirty two.

What’s your own motivation to carry one?

I wear the scarf out of love for my religion and to step into the footsteps of the strong women in our tradition, like Khadija, the first wife of Muhammad. She had her own business as well. I think that’s wonderful. She was one of the first women in history that we know to be a businesswoman. And with only men working under her! (laughs)

So why didn’t you wear a headscarf before?

Ten years ago I wound up in a terrible accident. It was almost a miracle that we survived it. The car toppled with a full bottle of butane gas aboard. My father, who was badly injured himself, succeeded in getting up, throwing out the butane container and getting everyone out of the car. Yet because of the accident I fell into a coma.

With the sword of Damocles hanging over my head like that, I had some sort of contact with ‘the other world’. I didn’t really see something because everything was white and bright, but still, at that time I had an experience that convinced me that I should go deeper into my faith. I prayed that I’d be allowed to live so that I could do three things: go to Mecca, wear a headscarf and start my own business.

Two of the three can be checked off at least. Did you go to hajj as well?

No, not yet. I’m waiting until Noor D’Izar runs well. And when I go I need to be well prepared of course because the promises you make over there have to be adhered to.

When did you start Noor D’Izar?

Some three years ago. 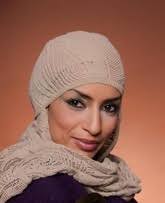 Do you see yourself as an artist as well or do you mainly do it because there’s a market for it?

A bit of the two. I’m born and raised in Belgium but I’ve always had a weak spot for fashion. So when I started wearing a headscarf myself, I noticed there was an enormous lack of choice. All you had were the same classical headscarves with the typical pins under the chin. That’s nothing for me. I certainly have a lot of respect for that type of headscarf but it simply looked to ‘grandma like’ on me.

So I started designing. I created a headscarf with little openings on the side, for example. Those openings can be used to put your sunglasses in. I was the first to design something like that, so therein perhaps lies a bit of the art. But we also patented it, so that’s the market again.

Do you have any other examples of ‘headscarf innovations’?

I have a model that combines a cap and a shawl. There’s also a scarf to which I attached a fur hood, which you can cozily pull over your head in winter. But just as well I designed one that has a little lid to give some shadow when you’re on a safari.

I also have a leather headscarf that was inspired by the caps of old pilots like the Wright Brothers. I was selected to go to the Fashion Week in Paris with that one. Obviously that was quite a unique event for a mom like me, being in the middle of all those young designers. Strangely enough not only Muslim women approached me, but Western women as well came to tell me they could wear such a headscarf. Even two men! They had the idea of wearing it on a motorbike.

Do you also take into account the particular styles of different countries? Turkish women wear their headscarf very differently than Moroccan women, for example.

You have to see me like any other fashion designer. They all have their own style and stick to it. The same is true for me. Turkish, Pakistani, Arabic, they all have their own style, but my headscarves can be worn by anyone. Then they’ll carry ‘my style’ a bit. People don’t know us too well until now, but once they do, I’m sure many will follow the Noor D’ Izar style.

Are you ever opposed from within Muslim circles? Are there some people who don’t accept that you make a fashion item out of a religious symbol?

I have talked about it before with an imam. He told me I don’t do anything wrong by selling my headscarves and he added that it matters little which color or form they have. And as a Muslim myself, I of course know what’s possible and what’s not.

I guess it would be quite difficult to voice any criticism from the side of Islam. The Islamic jurisprudence and tradition doesn’t have any strict rules about the look of a headscarf.

Indeed. If they wear a lot of black in Saudi Arabia, it’s because of the sun. It looks like it would attract the sun, but if you wear different layers, it actually keeps you cool under the clothes. So it’s not a prescription. The specific look of a headscarf is mainly a matter of culture.

Would you like to go one step further and design dresses as well?

That’s my dream, yes. But a headscarf is expensive already. So I just don’t have the finances for it now. Of course, a lot of people say that you can find everything you’re looking for in other stores but often people, like me, who live in migrant communities have to shop a long time to find all the right clothes. It’s not that we can’t wear any Western clothing but there are certain garments that need to be adapted to our dress code. If I buy clothes they’re often too long or too short or they have to be widened. In Muslim fashion for females one can’t center the clothes on the body. They have to be centered next to it, otherwise the clothes accentuate the curves too much. That’s an advantage of course for women who are a bit bigger, but it simply is a prescription from the Qur’an that women shouldn’t flaunt their curves.

Such prescriptions don’t make it easy for you, considering that you’re surrounded by a fashion culture that puts a lot of focus on accentuating the body.

That’s true, but I’m certain there are many ways to design very elegant, pretty, young and stylish outfits for Muslim women that want to follow the contemporary fashion.

Name Noor D’Izar Function Fatima Rafiy is the designer of Noor D’Izar, a fashion house that creates modern and fashionable headscarves. Works Noor D’Izar aims to identify and modulate a few key areas in hijab/headscarf design to produce a range that is at once stylish, practical, and innovative. They call their cutting edge hijab creation ‘Hijabology‘. More info: www.noordizar.eu