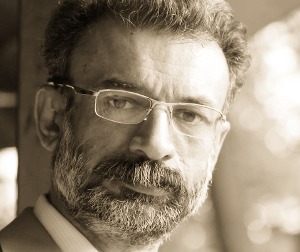 When most of your life was spent in a Western and European country, it’s always a moving experience to travel in countries like Pakistan. The poverty hits you in the face and the many socio-economic problems can seem insurmountable. I find it all too understandable therefore that many Pakistanis, for whom poverty is a daily reality, lose their hope. But there are also many others who refuse to give in, who keep the faith and who actively look for solutions. Farhat Abbas Shah is one of those. In Pakistan many might know him as a poet who has published 67 books and who still hosts a TV program on poetry and classical music, but Farhat is also the founder of the Farz Foundation, an organization that engages in innovative projects of sharia compliant microfinance.

When speaking of microfinance most people think of the Grameen Bank of nobel prize winner Muhammed Yunus. But the Farz Foundation works with a different method, I’ve been told.

Of course Grameen has done a lot of good because they are the pioneers and brought micro-finance to the international level. But since then a lot of modifications and innovations have happened and after having studied several models, I came to the conclusion that the asset based model is the best. The Grameen bank, like other banks, loans money to the poor. But when you give money to the poor they won’t necessarily use it for their business. They will sometimes buy food, clothes, cellphones or luxury products. Humans are humans after all. In the asset based model, however, you only supply tools and products to the lenders, like fruit for a fruit shop owner, cloth for a tailor or a cow for a farmer. So we only provide them with ‘assets’ that they can use to generate income.

Another difference with the Grameen Bank is that we have an integrated approach because we also provide training like basic business education and marketing skills to our partners so that they can become more successful in their business. In short, the Grameen bank makes the poor their customers. We make them our partners.

Yet eventually they still have to pay you back for the assets that you ‘loan’ them. So in a sense they remain customers.

No, we really do business with them. We sell them a product, which they don’t have to pay immediately, but within a year they have to return the money with profits. With profits, exactly because it’s business. In the case of livestock for example, we provide them with animals together with proper vaccinations and health care. The farmers themselves tend to the daily needs of the animal. And then, when the animal has offspring, the money the farmers earn by selling those is divided among the foundation and the partner farmer. So we can divide the profit. 50% for us and 50% for the farmer – who of course can make use of the cow throughout the year. If I have to explain economics in one sentence, I say that “economics means to sustain others.”

You claim to deal in sharia compliant microfinance, but if you get your money back with profits, isn’t that a form of hidden interest?

Not really. If there is a loss or if, for some sad reason, the cow dies, we also don’t get anything. So we share the risk. That’s why we truly are partners.

I am actually convinced that risk sharing is the most efficient way to mitigate the risk. We could even say that the risk-sharing is the best risk mitigating tool. When you share the risk for a hundred percent, you watch out for each other because what hurts one, hurts the other as well. But when we don’t share the risk, everybody only tries to protect himself which will result in others taking the fall. That’s why we are facing a financial crisis these days. The big businesses protected only themselves, but the whole economy was affected. So if I have to explain economics in one sentence, I say that “economics means to sustain others.” When I try to sustain you and you try to sustain him and he tries to sustain me, we will ultimately sustain each other and create a justified trading environment.

That’s quite different than the common idea of trying to make everyone as rich as possible.

Indeed. When the rich get too rich, the poor become too poor and the balance is lost.

Don’t get me wrong. I believe that privatization is not bad, that the free market is fine and that the idea of personal ownership is good. But there should always be a social corporate responsibility. Balance is very important. If business owners want to keep making money, if they want to keep selling products they have to enable the poor to join the economy. Many countries are making a mistake if their reaction to the crisis is to cut down on programs that benefit the poor. They should do the opposite – even in their self-interest, because if you enable the poor to join the economic system, you get a lot more potential consumers. We therefore have to connect the poor to the urban economics, to the national economic plans and even to the bigger macro-economics of globalization. It will not only provide them with jobs and opportunities but will be a lot healthier for the whole system. There is nothing dirty or wrong about doing honest business but we have to make sure the poor get the possibility to join the economy.  I call it a “Twist Up Economy” – which is an economy that becomes stronger because we sustain local economies through partnerships with the poor and by ‘twisting’ the flow of wealth from downwards to upwards. It’s the only way to maintain the proper balance.

You speak of balance. That brings us to the topic of ethics and spirituality. Did you go into Islamic microfinance because people asked for it or are you personally convinced that microfinance should be sharia compliant?

Certain studies showed there was a demand for it, which made particular institutions want to jump into it. So I saw I chance of getting funds from them. Yet in Pakistan it is very difficult to use the label ‘Islamic’ because there are a lot of bad things happening in the name of Islam. The state is always having problems with terrorism and extremism. So it was difficult for me to explain to people that I’m very different, that I’m an economist but also a poet and that I simply want to do something good.

So on the state level it still is a challenge, but when it comes to the work itself, one of the benefits is that we don’t have to worry about jihadists and terrorists when we present Islamic finance. The other microfinance practitioners that might use interest based systems could come into conflict with the Salafi jihadists in the poor rural areas but we don’t. We can go anywhere because it’s Islamic. So strategically speaking, it’s very good to make sure that your microfinance in Pakistan complies with the rules of Islam. And why not? It is a very clear, technical and just way of doing microfinance.

You mentioned that you’re not only an economist but also a poet. Your poetry has even been quite succesful in Pakistan. How did you come to write poetry?

There are several reasons for that. I was the only child of my parents, for example, which anchored a certain feeling of loneliness within me. Then, when I became an adolescent, I fell in love with a girl. But I lost her, which is probably what caused a certain sadness to creep into my soul. But sadness is good. Sadness makes you cool and calm. If you are sad in a positive way, you will not hurt anybody because you know how it feels to be hurt. And if you are able to make your sadness a force of creativity, you will definitely succeed. Eventually, it is sadness that drove me in my life and that brought me to where I am now.

Since you’re Pakistani, I suppose you were influenced by the Sufi poets of your region.

I most certainly like all the Sufi poets like Buleh Shah, like Shah Hussain, Sultan Bahu, etc. Some of my poetry has been considered as  Sufi poetry by the readers and critics, but I’m of course not a practicing Sufi myself. I’m a practical man involved in microfinance but at the literary level I feel very connected to those great poets and the way they speak of love, peace and passion.

On the other hand, you need a lot of passion to do the work you do.

Isn’t that lacking in Pakistani society? Isn’t there a ‘shortage of passion’ when it comes to the will and the desire to help the poor?

Not really. Pakistani people are among the top when it comes to charity. They very easily give donations. When the earthquakes and the subsequent floods happened a couple of years ago, a lot of people rushed out of their homes to help those in need. The problem is that the charity isn’t organized or institutionalized. So everyone gives and gives but if often ends up nowhere. That’s another reason why it’s good to deal with Islamic finance. It’s a perfect way of convincing certain people to give charity to the poor directly and not to the jihadis.

Do many people still support the jihadis?

If we look ten or fifteen years back, there wasn’t such a hatred for the terrorists. But now, when you go to any civilized person in Pakistan, they will tell you how much they are fed up with the terrorists. This is a success. Perhaps there is still a lot of underground support from particular groups or individuals, but in the public, they are rejected.

As such, extremism isn’t growing anymore in Pakistan but it’s still snapping its teeth at people. And if you ask me, poverty is the main reason that extremism still exists. If you look at the madrassas of the extremists, they are full of poor children. You won’t find any rich people. They give food and shelter to the poor, so naturally they feel loyal towards the extremists. If you let people live without any support or means to build a human environment, they will become animals and will cut the throats of innocent people around them. So the real jihad is not to kill the people. It is to help the helpless.

Farhat Abbas Shah is a poet, journalist and TV-presenter of Pakistan. The last few years he has also devoted his life to Islamic Microfinance Through the Farz Foundation. In April 2013 he was elected as the president of the Islamic Poverty alleviation Alliance Formed in Pakistan, the first Islamic Microfinance Working Group of Pakistan that brings together the different foundations and institutions that work in this particular field.