The Poetry of Creation 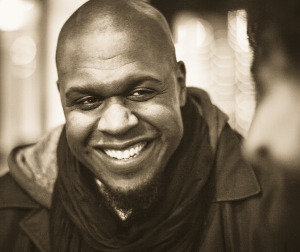 Poetry has an important place in the history of Islam. Not only can we refer to great poets like Rumi, Attar, Hafez or Buleh Shah, but even traditional textbooks that dealt with topics like fasting, prayer or jurisprudence would often include poetry. Yet, however widespread it used to be, in recent years, it doesn’t seem to have attained the same status as calligraphy or architecture. In some specific countries, such as Somalia, new generations of poets have stood up but, in general, and specifically in the West, Islamic poetry doesn’t seem to flourish.

Someone like Amir Sulaiman is an exception, and a very solid exception for that matter. Amir is an accomplished poet, activist, recording artist and a two time HBO Def Poet. He began writing poetry at the age of twelve, and by now, his widely acclaimed slam poetry, which oozes his rap roots, has brought him to perform all over the world.

When I saw one of his performances for the first time, I was thoroughly impressed. His voice is strong, his spirituality deep and his performance intense. I sat down with him to talk about the importance of words, the poetry of creation and the sneaky Sméagol in all of us.

Considering the importance of words in Islam because of the central place of the Qur’an as the revelation, one could expect to find ‘artists of the word’ wherever Islam can be found. How come there aren’t more Islamic poets who are born and raised in the West?

When Islam engages in a certain culture, it takes some time before the language is able to support the spiritual concepts. It may take a generation or two before people are able to express in their own language what Islam has brought to them. The Western Islam is still a baby nation. I’m sure that we’ll see more poetry as it develops into maturity.

Your poetry has a lot of hip hop and slam poetry influences. Do you also relate to the traditional poetry of the great icons of Islamic poetry?

Definitely. They’re a profound influence and their writing boggles my mind. Take Rumi and his Masnavi, for example, to write that much is one thing, but to write that much and make every verse a whole world in itself is simply incredible. However, when I was young, I didn’t know there was such a rich tradition. I got introduced to those poets when I was already in my twenties. But nowadays, I read more of that than contemporary stuff.

The language of the Qur’an, however, has always been a strong influence on me. When I was ten years old, it gripped me because it felt so lofty and majestic, but at the same time, I was listening to hip hop, which uses street language. So, my art form is a marriage of the very lofty and the very street. It wasn’t like I found Islam at a certain point and that it gradually influenced my poetry. It has always been one and the same. Islam was my faith and poetry was my personal means of expressing it. My poems also became more profound when I deepened my Islam. The centre of both is that I’m seeking to know God. Poetry is just a means to help me on that path.

In what measure, then, do you see the Qur’an as a book of poetry?

There’s a hadith that, after the death of the Prophet, someone asked his wife Aisha about his character. She described him as a ‘walking Qur’an’. For me then, the Qur’an is the sitting Muhammad and Muhammad is the walking Qur’an. Also, there is something about the symmetry and mathematics of the Qur’an beyond its surface beauty, which makes you realize that it couldn’t have merely come out of human inspiration. So, I don’t think of it as poetry. It’s a lot more.

On the other hand, I can sometimes see the whole of creation as one big poem. It’s interesting to realize, for example, that the beginning of creation is seen as a verbal act. In your Christian tradition, it’s in words like, “Let there be light!” And the Qur’an recounts that God said “Be” and it was. The revelation could have said God built the universe with His hands or that He poured the universe into shape, but no, he ‘spoke’ the universe into existence. And in the English language, the word ‘universe’ perfectly accords to this because it consists of ‘uni’, which means ‘one’, and ‘verse’, which means ‘poem’. So, to me, all of creation is just one divine expression.

There is also a hadith which states that Muhammad said that the pen was the first thing created. Another hadith mentions that the intellect was the first thing created. But those two accounts don’t conflict since they describe the same reality. It’s all about the words. There’s something very powerful in there. There was the spiritual reality and the material reality and the bridge between them is language. The mechanism that God created to bring things from non-existence into existence is the word.

However, we aren’t God and, as such, what we say isn’t always what we bring into existence. I mean to say that our words and actions aren’t always coherent because it is often difficult to practice what we preach. I’m sure that as a poet you have thought about this dilemma a great deal.

I teach a poetry workshop and the very first thing I always mention is sincerity. It’s the prerequisite for good poetry. And sincerity means two things: to know yourself and to be yourself. Reconciling what we believe and what we do is the basic question of our life. It’s what we’re here for. That’s why rituals are important. Sometimes when people go deeper into spirituality, they start to look down upon rituals as mundane, archaic and backwards, but the reason why religions have them is exactly to keep the coherence between your acts and your words. They help to reign yourself in when you drift away. Take the five prayers, for example. If we could be fully devoted and really engrain within ourselves what we’re saying, one prayer would suffice. But the truth is that we believe it when we’re saying it, yet our heart shakes fifteen minutes later when we get a certain email or phone call. So, the prayer sustains our faith several times during the day. The congregational prayer, every Friday, sustains it for the week. The Ramadan sustains it for the year. And the Hajj sustains it for the lifetime. All of these practices are meant to reign the heart and the mind back in and to get rid of the distractions. And all of it is to know God. Even in the straying there is knowledge of God.

This human dilemma of always trying to get back to the divine actually is the topic of my poem ‘Hallelujah’. A part of it goes like this:

My death is my birth
my spirit is divine but my ego is Sméagol
my precious,
ruthless and restless
foolish and reckless
the only way to truly live is to die.
Meet me back in the essence.

I used the metaphor of Sméagol, the little white creature of the Lord of the Rings, because he’s just a perfect example of raw ego. He’s a fearful, manipulative, greedy and maniacal little creature – he’s all of it simply because he can’t let go of that one thing – that power, that ‘precious’. And we’re all the same. We all have this one thing that we really can’t let go of and it hinders us to truly reconcile our belief and our actions.

You say the hajj is one of the rituals that has the power to reign us back in. The poems you collected in your trilogy, ‘The Meccan openings’, ‘The Medinan openings’ and ‘The openings’, are also meant as a sort of ‘thank you project’ because your hajj was unexpectedly provided for by someone else. Did the hajj bring a fundamental change in your life?

It did. It was a profound change and it certainly deepened my spirituality. What struck me most was the possibility to see the whole world gathering at the same place, like a mini-version of humanity. Not just because all the nationalities were there, but also because it brings together every type of person. It made me realize that, literally, everyone is searching for God – even those of whom you wouldn’t think so at first. Even addicts, for example, seek a deeper connection. Whether we seek God or not, all of us are in need of a deeper connection. It’s just that some are unclear about the correct direction and end up looking the wrong way, but they are looking for it nonetheless. This realization enlarged my capacity for compassion. In one of my poems, I wrote: “We are drawn to the light, like an addict to the pipe.” Like an addict is being pulled towards his addiction, we are all being pulled towards God.

Is there a verse in the Qur’an that ‘pulls’ you to God more than others?

Different verses inspire me at different times in my life, of course, but right now it’s verses one to three of Surah An-Nasr: “When God’s help comes and He opens up your path; when you see people coming into the way of God in huge droves, then glorify Him, praise Him and ask forgiveness for He’s the one who can accept repentance.” I find myself repeating this in my daily prayers. There’s the literal meaning on the one hand of many people coming to Islam, but on the other hand, I interpret the ‘droves’ as all the beings, the states and personalities that are living inside of myself. And I pray that all of them would be coming into the way of God — even my Sméagol.

You have said a lot about the importance and the power of words, but when you speak of the effort to focus the whole of our being on God, we can easily reach a point where words become insufficient.

True. To know about God is not the same as to know God. You can know much about the Prophets and their teachings, about how God revealed himself, at what times, and so on, but to really know Him is something different. It’s the same in human relations. You can know someone’s history and character, but that’s different than knowing someone through a marital bond or like a father relates to his son. There’s a level of intimacy beyond words.

In the end, all the words of the saints are a bit like running in place since they try to express their experiences of God even though it’s unutterable. Whatever we say about God, God is beyond it all. Even when we let our mind expand tremendously and imagine the most sublime things, God is still beyond it. But the poet can’t resist; he has to try to express it nonetheless.

Amir made a collection of def poetry albums called ‘The Meccan Openings’, ‘The Medinan Openings’ and ‘The Openings: Love, Gnosis & Other suicide attempts’. The first two can be downloaded for free on www.amirsulaiman.com