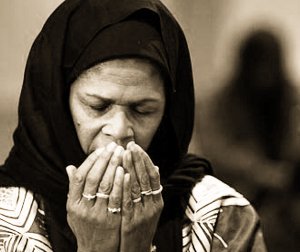 Few people combine solid academics with strong activism and gentle spirituality as smoothly as Amina Wadud. She’s the daughter of a Methodist minister, but this feisty American woman converted to Islam when she was twenty. Some forty years later, after a noted academic career, she travels all over the world to support processes of emancipation in the Muslim world – specifically on issues related to gender inequality.

“But I don’t only talk about women”, she tells me as we’re sitting in a hotel in Brussels. She was visiting the capital of Europe to lecture during a three-day conference on LGBT in Islam. “I’m trying to envision a sort of ethical framework of what it means to be a human being”, she explains. “Most of my work is, in some way or another, related to a sort of broad ‘moral thrust’. So, I’ve been trying to challenge age-old ideas that certain inequalities would be part of Islam in various aspects of life.”

According to many people, the world is going downhill. In classical Arabic, so I have been told, this can be expressed by the word mounqaliba, which could be translated as ‘devolution’. But you have travelled all over the world to support many emancipatory efforts. Does this give you a more positive outlook on the future, or do you also fear the increasing polarizations between rich and poor, secular and religious, East and West, and so on?

I do see some heightened emphasis on the dichotomy, but I’m much more optimistic, particularly when it comes to women’s involvement in the reforms of their own lives. I’ve seen things come to fruition that I couldn’t have imagined ten years ago. And even as there are some challenges to this positive thrust forward, I now see a greater connective force for Muslim women. And I love meeting young women who have just gotten engaged in the process because they make someone of sixty, like myself, even more hopeful that it will continue in a positive way. So, despite some of the backlash, I feel that we’re on the move and that the move is inevitable because of the non-sustainability of the things we’re facing. And it is becoming ever clearer to many people that gender inequality is one of those unsustainabilities of society. It’s almost as if time itself has proven the mandate of gender equality.

In what measure is Islam a force in this search for equality? Do most of the activists ‘happen to be Muslim’ while they get a wave of feminism going, or are they creating a specific strand of Islam?

I think it’s a combination. There are some people that strongly believe that the way to be successful is to leave Islam out of the formula. In regards to gender issues particularly, they rely on certain human rights instruments. So, there was a time where you could not have both Islam and human rights, but that was simply because nobody interrogated what Islam really means and who decides. On the other side, some people never interrogated human rights and just supposed that these texts weren’t useful simply because they were constructed in the West. Over time, however, many people have come to see that there is no problem reconciling the different approaches. The two really aren’t mutually exclusive at all and, in the end, you do not have to ‘choose’ one or the other. So there is no need to ‘prefer’ human rights over Islam and, therefore, throw away Islam. All we should do is ask ourselves the question: “Who decides the way Islam should be lived?” And then we should ask: “Why would I not be able to question some of those authorities?”

Would you then propose some sort of ‘Islamic liberation theology’?

I myself do not use the term because, the way it manifested itself within Christianity, liberation theology was a force for those in a state of oppression. ButI do not assume a state of oppression. Instead, I assume a state of misrepresentation, misinterpretation and misappropriation. So, there is nothing to be ‘liberated’ from. There is simply the need to reclaim the authenticity of Islam. And that’s an aspect of social, political, economic and spiritual transformation.

That’s why I prefer the term ‘reformed theology’. This is not the same as what is often called ‘liberal Islam’ because ‘liberal Islam’ only extracts some convenient elements out of Islamic theology, as well as other articulations of human well-being, and tries to leave the rest behind. But the methodology of a ‘reformed theology’ explicitly looks at the entire Islamic corpus. It specifically takes the responsibility for weighing the advantageous aspects of that classical legacy while, at the same time, challenging biases and misappropriations. It will question the intellectual and philosophical roots of injustices and will question the work that is done under the pervasive patriarchal thrust of human civilisation – but from the sources, which means that a ‘reformed theology’ will make use of the Qur’an and the life of the Prophet to attack aspects of misappropriation.

Let me give you a small example. As you know, I have been leading our local community in prayer. You will hear people who categorically say: “In Islam, women shouldn’t lead the Muslim community in prayer.” But the question must then be asked: “How do you come to those conclusions? What is your evidence?” And when you look back, you’ll not only see that the Qur’an does not prohibit women from being imam or leading in prayer. The Qur’an also doesn’t say they have to be male. Likewise, the Prophet never prohibited women from becoming an imam and never said it had to be a man. So, if the Qur’an and sunnah have no explicit confirmation of that opinion, we have to wonder how we came to that opinion.

I once read an article of yours that put forward Aisha, the Prophet’s wife, as a female example to reinterpret the gender equations in Islam. The article didn’t go very far into the subject, however. Yet, to me as a Christian, it seemed like a very good idea. From within my own tradition, I’m used to having particular historical people put forward as examples of how to handle certain contemporary issues. Saint Francis is one of those examples. The Franciscan inspiration is of great importance in the Christian tradition when we’re thinking about our faith’s relation to ecology. Some sort of ‘Aishology’ would, therefore, make sense to me as an Islamic inspiration for the discussion on how to handle the equality of men and women.

The article you refer to is called ‘Aisha’s legacy’, but that title was given to me. I would never take a title like that myself since I have a problem with the use of precedents to ‘prove’ certain things. We, for example, don’t have a historical precedent of a women’s interpretation of the Qur’anic texts until the twentieth century, but that doesn’t mean women aren’t supposed to interpret the Qur’an. The difficulty for women to pursue a scholarly career had nothing to do with divine sanction but was simply a matter of logistics. As a woman alone, you could not bundle up your possessions on the back of a camel and travel to Baghdad when you had some intellectual cravings. Today, however, we have the Internet and planes and all that kind of stuff, so there is no problem anymore for anyone to go and seek knowledge, get degrees and so on. Should we then not allow women to pursue more knowledge simply because they did not do it in the past?

As such, I do not base arguments on precedent or specific examples. I simply argue on the basis of any example. It could be a female example that benefits men, and it could be a male example that benefits women. In my Qur’anic exegesis, I base this on the wording of the text in Surah 66 – At-Tahrim – where it says: “God has given examples of disbelievers: the wives of Noah and Lot who married two of Our righteous servants but betrayed them. Their husbands could not help them against God: it was said, ‘Both of you enter the fire with the others.’ God has also given examples of believers: Pharaoh’s wife, who said, ‘Lord, build me a house near You in the Garden. Save me from Pharaoh and his actions; save me from the evildoers,’ and Mary daughter of Imran. She guarded her chastity, so We breathed into her from Our spirit. She accepted the truth from her Lord’s words and Scriptures: she was truly devout.”[1]

In the Arabic, ‘believers’ and ‘disbelievers’ are written in the male plural because that is the only form which is inclusive. That is to say, that the male plural can refer to women as well as men. In Arabic, it is only the female plural which is exclusive and, thus, can only refer to women. That means that the examples given in this surah, even though they are all female examples, actually apply to all believers and, thus, also to men.

[1] 66:9-12 from M.A.S. Abdel Haleem, The Qur’an. A new translation, Oxford University Press, 2004, p. 381. As the expression ‘so We breathed into her from Our spirit’ might obviously imply Christians, the Mary referred to in the last verse is, indeed, the mother of Jesus.

Amina Wadud is a retired Professor of Religion and Philosophy at Virginia Commonwealth University with a progressive focus on Qur’an exegesis and an activist for gender equality. Her books include Qur’an and Woman: Rereading the Sacred Text from a Woman’s Perspective and Inside the Gender Jihad: Women’s Reform in Islam