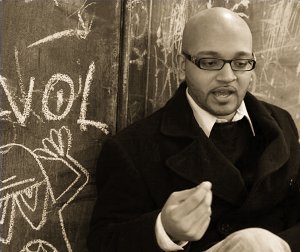 Aman Ali is at the forefront of the American debates about culture, religion and society. He unexpectedly found himself in the public spotlights after his very successful project ’30 Mosques in 30 Days’. This project recorded his travels of two Ramadans during which he and his friend visited one mosque a day, and each day in a different state. It gave a wide audience an inside look in the Islam of contemporary America. These ‘Ramadan Roadtrips’ got covered by CNN, BBC, PBS and Al Jazeera and their encounters touched the hearts of many.

After one of his shows in Europe, that touched both my heart and – as they say in my language – my laughing muscles, I got the chance to sit down with him and talk about faith, humor, culture and the Saladin-complex.

In your shows you don’t directly go into religious themes and your jokes are linked more to culture than to faith. How exactly then, is the Muslim comedian tied to the Muslim believer?

I think that religion, regardless of what faith you believe in, is a very personal and intimate relationship between a human being and God. Sadly enough though, people often interfere with that relationship, for example when Christians go like “What does the bible say about this? What does the Church say about this?” or when fellow Muslims say “Brother, you need to pray like this. Sister, you need to dress like that.”

I want to get out of the way myself and let faith be a very personal and intimate relationship. There’s no doubt that spirituality fuels what I do but I don’t want to preach. I don’t want to impose. That’s why I simply talk about my life, ’cause even if you’re not Muslim, even if you don’t understand my pain or happiness, God created us all in such a way that we can feel pain and happiness in the same way. So you may not know why I cry, but you know what it feels like to cry.

That’s why one of the best compliments I ever had was after a show that I did for a very traditional Baptist church in Texas. A guy came up to me and said: “Those stories about your father… if my dad was still alive, I’d race right home and hug him.”

Yet your jokes and stories are not completely ‘non-committal’. It seems to me that you also use your humor as a tool to tackle certain issues that are present in a community.

Sure. I’m of course also into comedy and storytelling simply because of the fun of it, but another part is indeed that, as a comedian, I get a platform to talk about some sensitive issues openly and honestly without offending anyone. Because like any community, the Muslim community as well has a lot of problems and we often don’t deal with them. A lot of portrayals of Muslims by Muslims have been very “Hurray! We’re Muslim!” but I feel we have been sweeping the ugly sides under the rug. Like how we treat converts and force them to change their name, grow a beard, wear a hijab and alter their lifestyle. Or like how we treat interracial marriage. Or like how we condemn and kick Muslims out of the community because they work in liquor stores.

As a comedian I can call things the way I see them. It’s not about being politically correct or ignoring some things I can’t talk about. It’s also not about trying to get a shock effect to make the audience go like “Oh my God! I can’t believe he said that!” But I do tell stories about my life and talk about issues that are prevalent within the community. The result is that people could perhaps be offended but eventually just start clapping and say “well, that does happen”.

In the ’30 mosques in 30 days’ project as well, I didn’t want to sensationalize the ugly things, but I wanted to give a more authentic and honest image. And so we talked about certain issues on our blog. We wrote, for example, about the Muslims who were working in the Casinos in Las Vegas. Although Islam says gambling is haram, a lot of Muslims do work in the Casinos. Unexpectedly a lot of non-Muslims started mailing us about it and said they were surprised to see we had similar issues as well. The Jews for example told about how they knew Jews that ate pork and were kicked out of the synagogue because of it.

Your project had a good deal of success and apparently inspired a lot of people, both Muslims and non-Muslims. But what did it do for you personally?

First of all I got to realize that there are a whole lot of struggles happening around the world. A lot of Muslims feel like they’re the only one going through certain issues. But I was going to community after community, travelling around the world and saw that these problems are happening all over the place. The youth is lonely and sad, people are unemployed and don’t know what to do with their lives, long time married couples are totally stressed out, and so on.

The second thing is that I became the token Muslim that had to respond to everything. The issues with the Ground Zero Mosque, the Quran-burning and the Sharia bills were all going on at the time of the project. So I was asked questions about those all the time. But I’m not a scholar or a representative. Our project as well isn’t a representation of Islam in America. It’s just the experience of two dudes that went on a road trip. If it had been two women you’d have a different experience.  Two black Muslims – it’d be different. Two converts – it’d be different. Two Christians – it’d be different. So we were very careful to show our project as a narrative and not as something academic but they nevertheless came to us all the time with their questions.

That brings us to a topic that is dear to my heart… I’ve been wondering lately why there seems to be a lack of good spokespeople within the community. The media always has to go back to the same couple of people. I do of course know the difficult socio-economic situation lots of Muslim migrants are in and I realize that it isn’t easy for people with their kind of socio-economic situation to stand up and speak out, but still… I have the feeling there’s a lack of people from the community that are willing to become positive spokespeople – not only in those countries where Muslims are migrants but also in a more world-wide sense.

I think there are several reasons for that.

First of all I think that we as human beings – forget about being Muslim for a second – live in a society where we give too much air-time to stupid people and stupid things. Often people say: oh, that’s all the media’s fault. But I’ve been a reporter. It’s not like journalists sit around thinking “how do I make the Jews look good today? And how do I make the Muslims look bad. Can somebody please give me some more bad-Muslim-stories?” That’s not it. But they do cover what’s ‘sexy’ and a guy yelling loud is ‘sexy’. A guy in Florida with a big mustache that starts burning the Quran, that’s sexy, so we give him the air time. We should care less about stupid people and ignore them.

Second, Muslims need to learn to put their frustration in perspective. The Christians dealt with persecution, the Jews dealt with it, the black people dealt with it – everywhere you go you find narratives of people that dealt with persecution. If we reflect on history it should give us some insight. I might have problems at the airport because I’m Muslim, but I still have the right to vote, I was never a slave and I was never denied to eat at a certain restaurant because of my skin color. So I always put my frustration into perspective and try to learn from history how I can deal with my issues.

That brings me to a third aspect which I call the ‘Saladin-complex’. When Muslims look at history they often only look at cool guys like Saladin, the heroic leader that bravely led the Muslims to recapture Jerusalem. We want to rely on people like him. So we always think certain scholars or leaders will make it different for all of us. But we underestimate our own potential. We all play a role. As a comedian, as a storyteller, as a writer I know my role I have to play. But when you’re a doctor or when you work in a shop, you can just as well break your fast and tell people about it.

Yet a lot of Muslims come from a society where free speech is not something that’s given. The idea of articulating your feelings or emotions is not something which is thaught or encouraged. So the frustration of unemployment and oppression often gets bottled up. The great thing about art however, is that it gives a nice way to express those frustrations. And I’m very excited to see Muslims use certain platforms to articulate these issues.

Aman Ali is an American writer, storyteller and comedian. He also works as a reporter and shares his perspective about social issues as a regular commentator for CNN. He is the co-creator of the social media phenomenon “30 Mosques in 30 Days”, a 25,000 mile road trip that took him through all 50 states in the U.S. with the mission of telling groundbreaking and profound stories about Muslims in America.