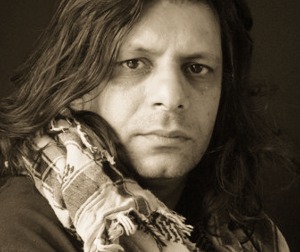 Aki Nawaz is the front man of Fun>Da>Mental. The band often aroused controversy, not in the least for songs like ‘Che Bin’, which compares Osama Bin Laden to Che Guevara, or ‘Cookbook DIY’, which describes in detail how to make a homemade bomb. It eventually made the British press label Fun>Da>Mental as ‘the Asian Public Enemy’.

But Aki Nawaz certainly isn’t glorifying terrorism. If anything, he simply tries to breach all stereotypes to stir debate. For years, he has been criticizing narrow thinking, challenging societal convictions and addressing the politics of racism. His quite undefinable style of music, which sometimes mixes qawwali with hip hop or puts Qur’an verses underneath some industrial rock, always add to the message.

You’ve been an outspoken voice for several decades now, through your music as well as through activism and public discussion. But after all these years, aren’t you getting fed up with it? Don’t you feel that it all constantly repeats itself and that all the talk about a possible clash of cultures eventually creates a self-fulfilling prophecy?

I’ve been in Gaza, I’ve spoken to jihadists, I’ve made documentaries about Guantanamo, I’ve travelled the Middle East . . . There are so many different positions, there is so much conflict, so much pain and so much suffering that needs understanding. And, in all of this, context is one of the biggest casualties. Many people simply don’t place things in perspective and make simple dichotomous caricatures of others.

It’s very hard to bring context and nuance back into the debate because we don’t have the correct platform to discuss or challenge the mainstream ideas. Islam is on the back foot to articulate itself because we only get twenty seconds to discuss things on the existing platforms. As a result, we forget how to build bridges and became very good at burning them.

But isn’t that partly the way you work? For example, when you wrote ‘Cookbook DIY’, you could have known what the reaction of the public would have been – two members of the parliament of the United Kingdom even called for your arrest. Not a lot of people would spontaneously see that as a way to build bridges, but rather as something that would burn them.

Well, it is, but at the same time, it isn’t. You can listen to the first, the second or the third verse. We knew they’d present the first verse. But they completely and utterly missed the point, because if you listen to all of it and look at the video, you’ll see a Christian jihadist. They interpreted it as a Muslim jihadist when it wasn’t.

Our intention was to challenge the ideas that had been put forward. Music can only do that up to a certain extent. So, we thought we’d challenge it on many fronts. Of course, we knew it would lead to confusion, but the confusion was already there because they’re calling me a terrorist while I know they are terrorists. So, what gives them the dominating attitude to dictate the parameters?

One of the aspects I actually like about the West is that they respect eccentricity, eclecticism and individualism. They respect these things a bit more than many contemporary Muslim cultures. I think that’s great. But, nowadays, they only want those things for themselves and not for me. Where does the audacity come from to even consider this position of superiority? I’ve travelled to South Africa and I’ve been to colonial countries. I know what the Europeans did everywhere. Somebody should tell them their own history and explain to them what they did.

I really want to be a bridge builder, but I also don’t want to be dictated to. My bridge building bears on equality, mutual respect and understanding. Because I’ve taken that perspective, it pushes me away from a lot of Muslim groups, while those at the other end – the secular, liberal or whatever you want to call them – think I’m too Islamic.

When I discovered your music many years ago, Islam didn’t seem to be much at the forefront of your music. Have you always had that religious sentiment?

I had it, but I didn’t know I had it. I used to talk about racism. It worked for everybody. They all understood what you were saying. We didn’t have to talk about something like hijabs for one, because there were hardly any around when we were growing up. But now we’re pushed against the wall because of our religion.

So what place am I fighting for these days? Do I want to compromise with religious people who I find very blinded and indoctrinated? I don’t, because I’ve seen the horrible things that such people have done. I don’t want to be a part of that. But I also don’t want to be a part of the other lot. They’re all indoctrinated, the jihadi in his jihadism, the neoliberal in his neoliberalism. So, I am very happy being absolutely, completely and utterly independent.

And how do you, someone who makes crossover hip hop punk, relate to the Prophet?

The Prophet was a dignified human being with all the problems and the issues of the concepts of his time. Although, I do have a few problems with some hadith. I don’t deny them but, in these matters as well, I’m completely opposed to not having the platform to discuss them. I can believe the Qur’an when I read its verses, but I have a problem believing in the Qur’an because I have to.

We need to debate many hadiths and passages of the Qur’an because I don’t believe Islam is part of a timeline. I think it’s something that reinvents itself with context. We don’t have an institute – which is fabulous – but we lack leadership and leftist politics in Islam.

That’s why I wanted Osama Bin Laden to be somebody who could see the whole picture, but he didn’t, just like most other jihadists. There should be a certain nobleness in jihad. Yet, after all the people I’ve met, it became clear to me that out of a hundred fighters, there’s maybe ten or fifteen people who are actually noble, dignified and decent in their hearts. Most of the others are just like the English here. They don’t have the spirit of true resistance. Neither do they have the spirit of humbleness or mercy. They forget that the Qur’an only allows defending yourself, but not transgressing. People like Osama Bin Laden don’t realize the limits of transgression. Had he done that, there might have been a real shift. But when Al Qaeda looks at the world now, what did it achieve? More Muslims have been killed and there’s more resentment. It has been magnified. The response of the West as well. So now there are two terrorists: the Muslim terrorists and the West.

I come back to my previous question then. Do you think your way of igniting things even more with your choice of music and words is a step forward in mending some of these issues?

You know, it goes back to my punk days. It is stating: “Don’t force parameters on me that you’re already used to. Don’t tell me I can’t be eccentric.”

But is it effective? Does such a type of ‘f*** you! statement’ win over people?

It’s true. I will sometimes say and do things just to test and see what the reaction will be. Perhaps there’s a perverted logic to it, but dissent is a very bizarre tool and it’s simply a part of my character.

I think, however, that there’s something fundamentally wrong with the human psyche and the current thought process – and it might just be because we’re all at each other. I can’t handle this ‘right wing’ and ‘left wing’, for example. I see the right and I see chaos. And I see the left and I think: “Be true to it.” Because when they come into power they say the same things the right does. I actually believe that people really want to see socialism work in a good way, but they don’t make it work. And in all of this chaos, human beings are simply becoming a currency.

One of my teachers once drew my attention to the awfulness of the concept of ‘human resources’ – if you really look at it, you can see that it means that in contemporary economics, humans have been degraded to resources.

You know, I don’t have anything against money or capitalism because capitalism really doesn’t need to create all the chaos it creates at the moment. What it could do is make everybody valuable. If you want to be a monster eating money, then you should give houses to families, jobs to people and make them more valuable because then they can spend, spend, spend and buy your products. So, even the capitalists aren’t consistent.

I just see so much corruption and bad motives everywhere – also within our own Muslim communities.

Certainly so, but at the same time, I also have a lot of hope for the world. The economic globalism does produce a lot of injustices, but exactly because of globalism, it also becomes impossible to simply hold on to one single view. It’s the same for the friction between secularism and Islam: whatever painful situations it creates at the moment, at least, step by step, it becomes totally impossible to hold on to one single secular and neo-liberal concept of the future.

We’ll see . . . When we did the song, ‘I reject’, the only line that people picked up and made a fuss about was: ‘I reject your mini-skirt liberation’. But they failed to grasp that the line actually comes from the women’s liberation movement in England! Only twenty or thirty years ago, those women went out, sprayed graffiti and bombed sex shops. So, that’s why they shouted to males how they rejected such a ‘sexual liberation’ that wasn’t one. And they were right. But, I’m Muslim, so I got it on my head when I used the same sentence.