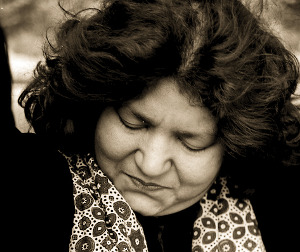 Abida Parveen is not only Pakistan’s most accomplished female singer of devotional music, but she’s also one of the foremost exponents of Sufi music worldwide.

Some years ago a music journalist from the BBC wrote, “Parveen could sing a shopping list and have an audience weeping.” He wasn’t exaggerating. Abida is truly capable of touching the depths of human souls when singing about the longing for unity with the divine – even when people don’t understand the Urdu, Punjabi or Persian words of the poetic verses. And when I met her in her home in Islamabad, it quickly became clear that it wasn’t only her voice that mesmerizes people. Her whole personality is capable of doing so, for behind her genuine humbleness I could immediately sense a thorough and deeply embedded spirituality.

Let us perhaps start form the very core of the matter. What, do you feel, is the essence of Qawwali, or, more generally, of Pakistani devotional music?

The word Qawwali, in fact, derives from the Arabic word ‘qaul’, which means ‘saying’ or ‘quotation’. That’s because our devotional music always tries to transfer a deeper meaning. It isn’t just some frivolous music. That’s why we also don’t say we ‘sing’ Qawwali or Sufiana Kalam but rather we say we ‘do’ it. We recite it.

Amir Khusrau, who was the inventor of Qawwali, knew the classical music of his days very well, so he used it to decorate his words and make them more beautiful through the use of music, but his main goal was to transfer certain messages or sayings. Besides expressing these messages in words, he gave a musical expression to their emotional content. For example, when the poetry spoke of spring, he knew how to translate the emotion of spring into music. Because of this he could touch the hearts of the people more easily, yet everything he did was always connected to the deeper spirituality.

And one of the core elements of this spirituality is what is called the most famous ‘qaul’ of Qawwali: “Man kunto maula fahaza Ali un maula.” It means: “When you accept me as your master, then Ali is your master too.” This is a hadith of the Prophet, peace be upon him. He made this announcement after he did the hajj. It is said that he stopped everyone at Khadir and asked to make a podium so he could stand on it and address the people. When he stepped on the podium he made this announcement, which wasn’t just a technical announcement. It was a miracle of God. It was a message that God provided through the words of the prophet. So within this verse lies the secret of our universe.

Amir Khusrow had understood this very well so that this qaul became the backbone of his qawwali. There are two reasons for this. The first is that the brotherhood and love that the Prophet showed for Ali at that very moment became a source of inspiration. The soulful connection that prophet portrayed there and then, is an example of how we should all relate towards each other. The second reason is that it explains how we have to look at Ali to see what it means to excel as a human. Ali’s deep spirituality is an example of how we should all try to be spiritual. That’s why that one sentence became the fundament of our devotional music and why the basic purpose of our music is to preach love, brotherhood, and humanity.

You now present Qawwali and Pakistani devotional music as something that is used to spread ‘general human values’. Yet isn’t it also a ‘religious tool’? Does it not also specifically try to convey the message of Islam to a broader public?

One of the aims of God and the prophets and the saints is to ‘upgrade’ humanity and human beings. You can improve yourself and your soul by looking and listening to the words of the saints. But their words speak about spirituality and mysticism. What they say is above religion. For in spirituality, religion shouldn’t matter. In that sense, true Islam is for everyone. It’s not a religion for a specific group of people. Islam is a gift from God to the whole of humanity. Islam is not prejudiced. Wherever people are doing good deeds, there is Islam. Wherever you find good things, it’s Islam. Whenever you think something is good, it’s Islam.

So Islam is about love and brotherhood and being unified. And it was the function of the saints to spread and announce the message and the mystic spirituality of Islam. Whatever they do, they did it from their hearts. That is why they constantly spoke of the connection between humans and God.

Within unity one often finds diversity and vice versa. Can we find diversity in this message of unity as well?

Certainly. Though the saints all pointed towards the mystic spirituality of Islam, they all preached or wrote in a different manner and some emphasized different aspects than others. So all saints have different ‘colors’ and ‘styles’. The poetry of Shah Abdul latif Batay is very moving and merciful while the poetry of Lal Shahbaz Qalander is very awe inducing. Sultan Bahu’s poetic phrases always end with the word “hu” which is sung very slowly, in a soft and mellow way, giving it a very soothing sound while Abdul Latif Bhittai invented the tambura, a long-necked stringed lute, so that in his shrine, every night, a hundred followers of his play the tambura until the morning prayer.

It’s not just the words, the poetry or the accompanying instruments of the saints that vary. Their character is also visible in other aspects of their shrines – in the architecture, the dressing of the people and the color of the fabrics used in the monuments.

Just like the saints have their own character, contemporary Pakistani devotional singers have their own style as well. Most people in the West who know something about Pakistani music are familiar with the Qawwali of the late Nusrat Fateh Ali Khan. But the type of music you bring, is quite different.

Indeed. I don’t really bring Qawwali. I recite Kalam – Sufi poetry. Qawwali is always brought in a group, mostly of nine to twelve people while in the way I recite the Kalam, it can be just one or two people. But of course, the spirituality and verses are the same. The music simply has different shapes. Qawwali is one of those shapes, the Sufiana Kalam I bring is another.

Did you ever experience any problems in a patriarchic society like Pakistan as a female singer?

And do you have a special bond with female Sufis like Rabia?

All saints reached a great level. It’s not up to me to say who is higher and who is lower. I have no status to distinguish between superior and inferior. And within the higher spirituality of the Sufi saints, male or female also loses its meaning. They own the spiritual world and the spiritual world is there because of them. They’re all imams who lead the whole humanity. And I follow them.

Yet, as you explained, Ali retains a specific place in your tradition. So do you have a special connection to him, not only in general as a Shia, but also on a personal level, as a singer?

Of course, Ali is my guide and without the presence of my guide, I cannot sing or recite! I have to ‘see’ him before I can start. Like God is present, Ali is present.

During our conversation, Abida sang a song to support her words. This is the recording of this short and gentle ‘performance’ in her home.

Abida Parveen Function For several decades Abida Parveen, one of Pakistan’s most famous artists, has been performing in a wide range of venues both sacred and secular, from the shrines of saints in her native Sindh to the world´s greatest concert halls. She mainly sings ghazals, long lyrical poems, and kafis, a solo genre in which the singing of traditional Sufi poetry is accompanied by percussion and harmonium. Works She has recorded over a hundred albums of which Ghalib and Abida sings Amir Khusrau are two fine examples.